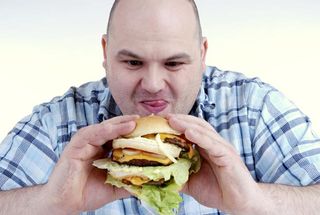 You know you shouldn't, but you just can't help it.

Whether it's nail-biting, thumb-sucking or overeating, nervous habits plague many individuals, who just can't seem to stop. But why do we engage in these behaviors, and can they have detrimental effects?

Here's a look at some of the most common compulsions, as well as ways to make 2010 the year you really quit biting your nails — or quit whatever bad habit you're saddled with.

Despite the perception of these habits as behaviors set off when we're nervous or stressed, they can occur at any time, depending on the individual. People may engage in them when they're bored, relaxed, by themselves or watching TV.

People likely continue these habits because they receive some satisfaction from the behavior.

"Any habit that is perpetuated is rewarded," said Carol Goldberg, a psychologist in New York City. "So in some way it makes them feel more relaxed, or it gives them something else — if it weren't rewarded they wouldn't keep doing it, so they're getting something from it."

These seemingly harmless actions  can have adverse consequences.

For instance, biting your nails can be unsanitary and spread germs, Goldberg said. "From that point of view, of catching something, having your dirty fingernails in your mouth is not a very good idea," she said.

Nail-biters may also be judged negatively by others. "Socially, it doesn't look nice," Goldberg said. "If you bite your nails, it doesn't show you off as well."

Thumb-sucking is not without risk either. If children don't give up the habit by the time their permanent teeth come in, it can cause oral problems, including misalignment of teeth and changes in the roof of the mouth, according to the American Dental Association.

The health problems of overeating and smoking are more widely known. Eating too much can lead to obesity, which has been associated with many medical conditions, including diabetes, heart disease and cancer. Smoking also increases the risk of diseases such as lung cancer, stroke and heart attack.

While it may not be easy, kicking nervous habits is definitely possible, psychologists say. The first step: You have to want to quit, Goldberg said. Once you've decided to give it up, you can either go cold turkey, without any assistance, or you can use aids and tricks to help you.

Nail-biters may wear gloves or keep their hands in their pockets, Goldberg said.  And finding other activities to occupy your hands, such as knitting or squeezing a stress ball, may help, Donnenfeld suggests.

It is also important to identify when you start the biting or sucking, since many engage without noticing, "Once you get a sense of that, you can begin to track when it's happening and work to interfere with it as sort of an automatic type behavior," Donnenfeld said.

Tackling overeating is a bit more challenging. "You can live without biting your nails, but you have to eat food," said Goldberg.  "So food is something where you have to be able to exert control in terms of not letting the amount become overwhelming."

Habits like smoking may require the assistance of patches and gums that are intended to wean you off nicotine, the addictive substance in cigarettes. Changing your routine may work as well. "If you're used to smoking when you have a cup of coffee, maybe skip your cup of coffee," Donnenfeld said.

While the ultimate goal should be changing your behavior, it is important to have intermediate goals along the way, Donnenfeld said.

"I can't say, 'I'm never going to bite my fingernails again.' What I might say to begin with is, 'I'm going to notice each time I put my fingers in my mouth, and I'm going to take them out,'" she said.

And you shouldn't look at one slip up as meaning that quitting is futile, she said. "If you eat a donut it doesn't mean that you should just eat whatever you want the next day because it doesn't matter anyway.  At any point along the way you can make the decision to stop the behavior."