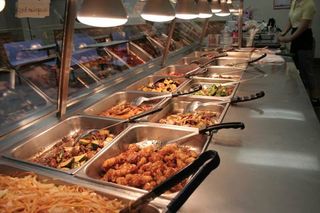 At an all-you-can-eat buffet, heavier people are more likely to use larger plates, chew less and engage in other behaviors that lead to overeating, a new study finds.

Brian Wansink, director of Cornell University's Food and Brand Lab, investigates the psychology behind common eating behaviors, especially those that lead to overeating. The current obesity epidemic has been linked to the prevalence of affordable, accessible food doled out in large portions.

Author of the book "Mindless Eating: Why We Eat More Than We Think" (Bantam, 2006), Wansink and his colleagues were interested in examining food-related behaviors at all-you-can-eat buffets, which have been multiplying along with the rise in obesity.

"It's so hard at a buffet to know when you're full," Wansink said.

The researchers sent trained observers to watch 213 randomly-selected patrons of 11 all-you-can-eat Chinese buffets across the United States. The observers also noted the approximate age, height and weight of each patron they studied.

They found that heavier patrons, whether overweight or obese, were more likely to:

Many of these habits have to do with allowing for greater ease in eating. For example, chopsticks mean less food per bite and more effort to pick up food. Likewise, booths tend to be further away from the buffet and are more difficult for heavier people to sit in.

"Anything that reduces the convenience of eating has a huge biasing effect," Wansink told LiveScience. Such behaviors are "something that heavy people or obese people were unlikely to do."

For heavier people to sit close enough to a table to eat comfortably, their stomachs usually touch the table, Wansink said, "so putting your napkin in your lap, it doesn't really work."

But like the proverbial chicken and egg, Wansink and his colleagues don't know which comes first: a person's behavior, or their weight. As Wansink put it: "Is that what made them thin, or is that what thin people do?"

Either way, it shows a link between certain behaviors and overeating. While people are generally unaware of the behaviors, they can become more attuned to them and might be able to control them to change their eating habits, for example, by picking up a smaller plate instead of a large one.

The findings will be detailed in an upcoming issue of the journal Obesity.