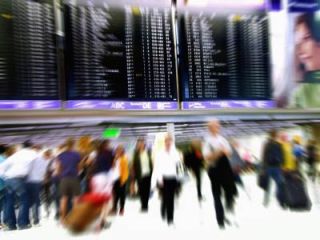 When airport screeners don’t expect to find a gun in your bag, they likely won’t, suggests new research that shows that when people think something will be difficult to find, they don't look as hard as when they think they're likely to see what they're searching for.

"We know that if you don't find it often, you often don't find it," said cognitive scientist Jeremy Wolfe of Harvard Medical School. "Rare stuff gets missed."

Wolfe and his colleagues discovered the effect, which seems to apply to any rare thing we may be hunting for, including weapons in checked baggage or tumors in radiology scans. The research was funded by the Department of Homeland Security.

The results come on the same day as the announcement of a security breach at the Gallatin Field airport in Bozeman, Mont. On Dec. 13, airport screeners failed to catch a gun packed in one man's carry-on luggage, the Bozeman Daily Chronicle reported. The man turned himself in when he remembered he had packed it, and was allowed to board the plane.

They asked subjects in the lab to look at X-ray scans of checked baggage, as if they were airport screeners. In one trial, 50 percent of the scans showed a gun or knife in the bag. In this test, subjects did fairly well, only missing the weapons about 7 percent of the time.

In another trial, the  guns and knives appeared much more infrequently — in only 2 percent of bags. This time, subjects missed the weapon 30 percent of the time. In other words, their accuracy went down sharply when the item they were searching for was less prevalent.

“The probability of finding something affects how quickly you abandon the search,” Wolfe told LiveScience. “If you’re looking for the can opener in that kitchen drawer that’s full of gadgets, and you know it’s probably there, you’re going to spend a lot of time searching for that can opener.”

But if someone suggests you search for something rare in the kitchen drawer, such as valuable Civil War-era silver, he said, you’re likely to give up the hunt quickly, because you lack confidence that you’ll find it.

In effect, we make finding rare things even harder than it already is by psyching ourselves out of the hunt.

Ironically, while this phenomenon makes certain modern-day searches harder than they need to be, it likely evolved in humans as an adaptive ability, Wolfe said.

“It’s a pretty good idea if you imagine that you are a little beastie wandering around in a field, looking for food,” he said. “If you’re looking at some bush that almost never has anything good for you on it, you should get out of there and not waste your time. But if there’s a bush where the last six times you visited, it had something good for you, you should spend more time looking there.”

Wolfe and his team are working with the Department of Homeland Security to come up with ways to overcome the once-adaptive effect. It’s not as simple as just telling airport security personnel to look extra carefully, because this prevalence effect involves unconscious parts of our brains.

Even Wolfe, who knows about the phenomenon, scores just as badly as everyone else on the lab trials. But he and his team hope there are more clever ways of overcoming the problem, which could have uses in security and medical screening, as well as other areas.