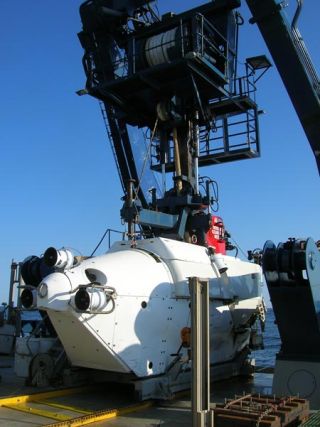 The submersible Alvin which Emily Beale and her colleagues used to collect sediment from methane seeps in the Eel River Basin in California.
(Image: © Emily Beal, Penn State University)

About three years ago, Emily Beal — a graduate student in geosciences at Penn State —eagerly boarded the deep-diving research submersible called Alvin, bound for the bottom of the ocean.

After squeezing into Alvin’s titanium sphere, Beal began her plunge to the ocean floor with more than a tad of claustrophobia. Alvin was just big enough to hold her, the submersible’s pilot, and Penn State colleague Chris House. Fortunately, as Beal peered out of Alvin’s plate-sized portholes during her descent, her claustrophobia quickly gave way to pure, unalloyed exhilaration.

“Once we dropped below the ocean’s sun-lit surface layers, the pitch-black ocean was illuminated by fluorescing organisms; they sparked and twinkled like stars; they were gorgeous,” she recalled.

A mission for microbes

Why were Beal and House travelling to the bottom of the ocean? They were heading to collect samples of microbes that live near methane seeps — places where methane and other hydrocarbon-rich fluids gush from the ocean floor.

Beal and House collected these samples as part of a research project conducted with Victoria Orphan of the California Institute of Technology.

Scientists are drawn to methane seeps because they host unique ecosystems that, unlike almost all other ecosystems, are independent of light and not powered by photosynthesis. Rather, these ecosystems are powered by chemical energy that is produced when microbes consume methane that seeps through oxygen-free sediments.

“Almost all methane released at methane seeps is consumed by microbes,” said Beal. “As a result, very little of this methane, which is an important greenhouse gas, makes it into the ocean water and atmosphere.”

Yet much remains mysterious about methane seeps. “We don’t totally understand why methane seeps form where they do; perhaps these fluids rise through faults from areas where they are produced at depth by biological or other processes,” said Beal. Beal’s research party knew that they would probably find methane seeps in their target area because other researchers had previously found them in that area.

Scientists know very little about the chemical reactions that occur when microbes consume methane at methane seeps, partly because of the difficulty inherent in collecting pure samples of methane-eating microbes from seeps and growing them in the laboratory.

Nevertheless, scientists have long known that microbes combine the methane released from methane seeps combines with sulfates to form hydrogen sulfides and carbon dioxide. The hydrogen sulfides produced through this reaction nourish clams and other animals living at methane seeps, and the carbon dioxide produced eventually precipitates out of the water as carbonates, preventing the greenhouse gas from making it to the atmosphere.

Scientists have long suspected that other types of compounds besides sulfates may combine with methane to produce carbon dioxide, but evidence is lacking.

After descending through the water column for about an hour, the research party approached a swath of ocean floor about 530 meters (about 1740 feet) deep.

Then, the Alvin’s pilot switched on the submersible’s spotlights which illuminated a flurry of flat fish and an occasional shark, and set Alvin on a course parallel to the seafloor.

During the three-hour research patrol that followed, Beal and House found multiple methane seeps by looking for their telltale signs: methane bubbles rising from the ocean floor, white and orange microbial mats carpeting the sea floor and clusters of clams feeding on hydrogen sulfates.

By manipulating Alvin’s two hydraulic, robotic arms, the researchers were able to collect microbe-containing sediments from these seeps and haul them back during their hour-long ascent back to the surface.

Once Beal and House returned to the lab, they set out to determine whether microbes at seeps use iron oxide or manganese without the presence of sulfates to convert methane to carbon dioxide.

The research involved comparing the amount of carbon dioxide released from several sediment systems sampled during the Alvin dive. Some of the systems contained sulfates; some were sulfate-free; and some contained iron oxide or manganese oxide without any sulfates.

The researchers’ results, which were published in Science on July 10, 2009, showed that as expected, methane consumption was highest in the sediment systems that contained sulfates.

Nevertheless, both the iron and manganese oxide-laced samples also showed significant amounts of methane consumption, though less consumption occurred in those systems than in the sulfate systems.

The results also suggest that reactions between methane and manganese or iron oxide may have played an important role in the methane cycle during the Earth’s early days, added Beal. “During that period, there was probably enough manganese and iron oxide available to support chemical reactions consuming methane.”

So far, Beal has categorized more than a dozen seep microorganisms included in her experiments. Nevertheless, she does not yet know which individual microbe or consortium of microbes is responsible for consuming methane, but hopes to eventually identify these important organisms through her ongoing research.