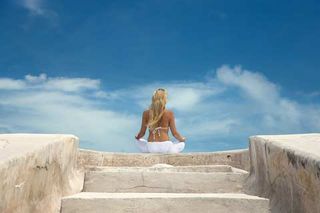 Women who practiced the Eastern techniques of mindfulness and yoga reported improvements in levels of arousal and desire, as well as better orgasms. Image
(Image: © Dreamstime)

Is it sexy to be spiritual? New research has found that spirituality has a greater effect on the sex lives of young adults — especially women — than religion, impulsivity, or alcohol.

“I think people have been well aware of the role that religious and spiritual matters play in everyday life for a very long time,” said Jessica Burris, one of the study’s researchers at the University of Kentucky. “But in the research literature, the unique qualities of spirituality — apart from religiousness — are not usually considered.”

According to a research measure known as the Spiritual Transcendence Scale, those qualities are connectedness, universality, and prayer fulfillment. But the data found that of the three, connectedness plays the largest role in spiritual sexuality and leads to more sex with more partners, often without the use of condoms.

“Believing one is intimately tied to other human beings and that interconnectedness and harmony are indispensible may lead one to believe sexual intimacy possesses a divine or transcendent quality in itself,” Burris writes. “In fact, ascribing sacred qualities to sex has been positively associated with positive affective reactions to sex, frequency of sex, and number of sexual partners among university students.”

The study’s participants indeed were university students; 353 undergraduates (61 percent of whom were female) answered a questionnaire that asked them about their alcohol use, impulsivity, religiousness, spirituality, and sexual practices. The statements on spirituality, which were ranked by level of agreement, included “In the quiet of my prayers and/or meditations, I find a sense of wholeness,” and “Although individual people may be difficult, I feel an emotional bond with all of humanity.”

The study found that spiritual men weren’t sexually affected — in fact, their frequency of sex decreased. The researchers figure men might not view spirituality as sexual because they biologically don’t think of sex as a gateway to emotional intimacy.

For women, however, spirituality was the strongest predictor for the number of sexual partners, the frequency of sex, and the tendency to have sex without a condom.

“It is possible female young adults yearn for greater connectedness with other humans,” Burris writes. “Spirituality, at least for women, could be considered a risk factor.”

[A separate review of studies last year found that sexually unsatisfied women who practiced the Eastern techniques of mindfulness and yoga reported improvements in levels of arousal and desire, as well as better orgasms.]

But is it really spirituality that makes women more sexual, or does spirituality just imply an open-mindedness that manifests itself through sex?

“Research suggests that spirituality provides predictive utility over and above personality traits such as conscientiousness, extraversion, and openness,” Burris told LiveScience. “So while it may be the case that spirituality is correlated with other variables that show similar relationships with human sexuality and sexual practices (such as openness to experiences), the relationship we observed, in my opinion, cannot simply be explained away by other variables.”