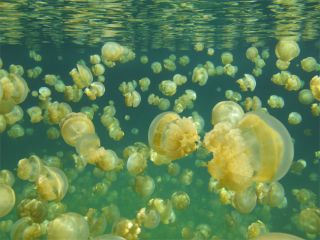 Mastigias jellyfish flood Jellyfish Lake, a marine lake in Palau, an island nation in the Pacific Ocean. Here, researchers found that pulsating jellyfish stir up the oceans with as much vigor as tides and winds, making them major players in ocean mixing.
(Image: © K.Katija/J.Dabiri.)

Pulsating jellyfish and their swim pals stir up the oceans with as much vigor as tides and winds, scientists have found. Their study also found that the shape of the aquatic blobs affects their mixing abilities.

Until now, oceanographers had dismissed the idea that such tiny ocean creatures could play a role in mixing various layers of ocean water on a large scale. The argument was based on evidence that any swishing from fish tails, say, would get dampened by the ocean's viscosity (a measure of a fluid's resistance to flow — honey has a high viscosity compared with water).

But the new study, which is published in the July 30 issue of the journal Nature, reveals a mixing mechanism first described by Charles Darwin's grandson that is actually enhanced by the ocean's viscosity, making these tiny sea critters major players in ocean mixing.

"We've been studying swimming animals for quite some time," said John Dabiri, a Caltech assistant professor of aeronautics and bioengineering. "The perspective we usually take is that of how the ocean — by its currents, temperature, and chemistry — is affecting the animals. But there have been increasing suggestions that the inverse is also important — how the animals themselves, via swimming, might impact the ocean environment."

After all, each day, billions of tiny krill and some jellyfish migrate hundreds of meters from the depths of the ocean toward the surface where they feed. And with swarms of the gelatinous organisms popping up across the world's oceans, if the swimmers do indeed mix the water their impact could be major.

"There are enough of these animals in the ocean," Dabiri said, "that, on the whole, the global power input from this process is as much as a trillion watts of energy — comparable to that of wind forcing and tidal forcing."

Dabiri and Caltech graduate student Kakani Katija discovered the jellyfish mixing with computer simulations and field measurements of jellyfish swimming in a lake in Palau in the Pacific Ocean.

In their field experiments, the researchers squirt fluorescent dye into the water in front of the Mastigias jellyfish and watched what happened as the animals swam through the dyed water. Rather than being left behind as the jellyfish swam by, the dyed water travelled along with the swimming creatures.

{{ video="LS_090729_JellyFish" title="Jellyfish Mix Up Ocean Water" caption="As the jellyfish swims, water gets pulled along with the animal, seen as swirls of red or green dye that was injected into the water." }}

Here's how the researchers think it works: As a jellyfish swims, it pushes water aside and creates a high-pressure area ahead of the animal. The region behind the jellyfish becomes a low-pressure zone. Then, the ocean water rushes in behind the animal to fill in this lower pressure gap. The result: Jellyfish drag water with them as they swim.

"What's really cool about these jellies [is] they have huge variation in their body shapes," Katija told LiveScience.

And they found such differences can impact the amount of water that hitches a ride with the jellies. For instance, moon jellyfish (the kind typically seen at aquariums) have saucer-shaped bodies and can carry a lot of water with them. But other bullet-shaped jellyfish would drag smaller volumes of water.

The ocean churning has broader implications.

Without any mixing, the surface of the ocean would lack nutrients, as any food gets gobbled up immediately, while the ocean bottom would remain deplete of oxygen. "With this mechanism, through mixing the animals can pull nutrient-rich fluid up to nutrient-poor areas and pull oxygen-rich fluid down to oxygen-poor regions," Katija said.

And on larger scales, the biologic blender could impact the ocean circulation, which affects the Earth's climate.

Dabiri and Katija say such mixing effects should be incorporated into computer models of the global ocean circulation.