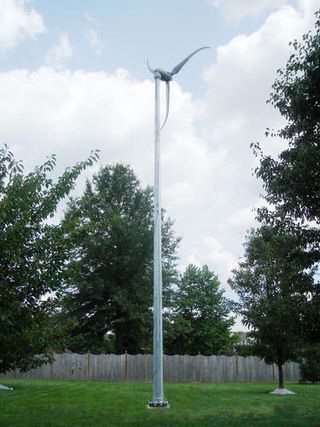 Editor's Note: "The Energy Debates" is a LiveScience series about the pros, cons, policy debates, myths and facts related to various alternative energy ideas. We invite you to join the debate by commenting directly on each article. The Facts The picture that wind power often brings to mind is that of giant turbines on wind farms, which produce megawatts of electricity using rotors up to hundreds of feet in diameter. Small wind power systems, on the other hand, use comparatively petite turbines to support individual homes. A typical residential wind energy system might be 1 to 10 kilowatts in capacity, with a 10- to 25-foot diameter (3 to 8 meter) rotor mounted on an 80-foot (24-meter) tower, according to the American Wind Energy Association. Turbines as small as 400 watts with rotors just 46 inches (117 cm) in diameter can help power water pumps or run lights and appliances. Pros Wind power is free, endless and 100 percent free of pollution and greenhouse gases. The American Wind Energy Association estimates that a small residential wind turbine can offset 1.2 tons of air pollutants over the course of its up-to-20-year life that your utility company would have otherwise generated, as well as 200 tons of carbon dioxide and other greenhouse gases that cause global warming. For people completely off utility grids, "you have to have wind power," said wind energy expert Paul Gipe in Tehachapi, Calif., who has authored several books on the field. "A hybrid system with both wind and solar power will always be more cost effective and reliable than either wind or solar alone, and will always be cheaper than flying in diesel." Cons Most, if not all, rooftop wind turbines "simply don't work," Gipe said. "There is no stupider idea than attempting to harness wind energy by putting a turbine on a rooftop. There's too much turbulence over rooftops for turbines, and the trees and buildings that are often around houses obstruct the wind. A turbine has to be well above a rooftop to do any good, which means mounting it on a very tall tower, and if you're going to have a tower, you might as well have a tower that's mounted on the ground." A number of small wind turbines are promoted as running at low wind speeds. While this may be true, the American Wind Energy Association’s Web site explained, there is very little energy to be harvested at wind speeds less than 9 mph (14 kph). "There are also claims by some that their wind turbines are silent," Gipe said. "I have seen many silent rooftop wind turbines, and they are silent because they don't work. There are many people who want to participate in renewable energy, and so they may be prey to hustlers overstating fraudulent claims." Small wind turbines do make some noise, although the American Wind Energy Association contends a typical residential wind system makes less noise than the average washing machine. It also noted the turbines do kill some birds that run into them, although it added that statistically, a single housecat, windowpane or automobile is a much greater threat than a wind turbine. "There are no panaceas when it comes to renewable energy, no cheap or easy solutions regardless of whether it's wind or solar or something else," Gipe said. What do you think?