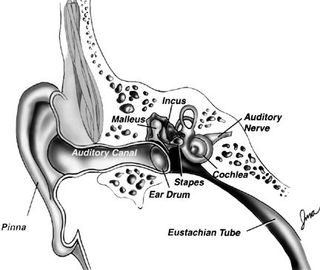 Inside your ear is a twisted organ that looks like a snail shell. It's called the cochlea, and it performs the vital function of transforming sound into nerve impulses that head off to your brain, allowing you to hear.

Scientists have long thought the cochlea's shape was no more than a means of packing the necessary pieces and parts into a tight spot.

But a new study suggests the spiral shape enhances the sounds in the frequency range of human speech, perhaps making the difference between hearing a whisper or nothing at all. The finding could help improve designs of mechanical sound receivers, including better cochlear implants for the roughly 59,000 people who get them every year.

The cochlea is a complex organ deep inside your ear. It is essentially a long tube coiled in a narrowing spiral. It works like this:

Sound waves cause the eardrum to vibrate. Small bones transmit the vibrations to fluid in the cochlea. Waves of differing frequency peak at different points along the cochlea's long tube, which is actually divided into two halves by a basilar membrane. Hair cells at the big end of the organ detect high-pitched sounds, and hair cells deep down at the narrow end detect low-frequency sounds.

Previous studies found that the tube's shape had no effect on how sound is detected. But Richard Chadwick and Emilios Dimitriadis of the National Institutes of Health decided to pursue the possibility anyway. They recruited Daphne Manoussaki, a mathematician at Vanderbilt University, for her ability to model complex structures.

"I knew nothing about cochlea mechanics and I think that was to my advantage," Manoussaki said. "I looked at this organ that was shaped like a snail but that everyone was modeling as if it were a straight duct and I asked the obvious question."

Manoussaki found that the spiral shape causes wave energy to accumulate against the outside edge of the chamber.

The uneven energy distribution causes fluid in the cochlea to slosh higher on one side of the chamber. This tilts the basilar membrane in the direction to which the hair cells are most sensitive. The effect is strongest in the area where the lowest frequencies are detected.

The effect is akin to the "whispering gallery mode" in which a mere whisper can travel along the curved walls of a large chamber and stay strong enough to be heard clearly on the opposite side of a room.

Sensitivity to sound is increased by up to 20 decibels, a difference equal to that between a quiet restaurant and a busy street, the researchers said.

"This would indicate we need to take a step back from the cell biology and see how the cochlea works as an integrated system," said Karl Grosh, an expert on ear structure at the University of Michigan in Ann Arbor.

"The more we understand how the cochlea works, the more success we will have in building signal processing systems that mimic its auditory characteristics ... an important aspect in designing cochlear implants and analog cochlear processors, said Grosh, who himself has designed silicon cochlear implants.

The finding, announced this week, was published in the journal Physical Review Letters.