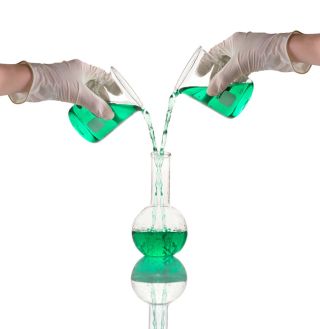 Chemistry is about mixing ingredients to make a desired product, but there is almost always some bit leftover that has to be carefully disposed of. In the pharmaceutical industry, for instance, each pound of drugs comes with 25 to 100 pounds of waste—some of which poses health hazardous.

Other chemical industries are less wasteful than this. But at least 40 million tons of hazardous waste is generated in the United States each year, according to tallies by the Environmental Protection Agency (EPA) on regulated substances.

A growing movement called green chemistry aims to reduce this ecological toll by redesigning how chemical products are made. Some of these greener alternatives, like less harmful plywood and more energy-efficient cushions, are already on store shelves.

This week five green chemistry innovations were recognized with the 2007 Presidential Green Chemistry Challenge Awards. Since 1995, the EPA has presented these awards to encourage green practices in both industry and academia.

Green chemistry has been around since the 1990s. Whereas a lot of effort is put into cleaning up the waste that comes out of chemical manufacturing, green chemistry tries to avoid the mess in the first place.

"It's about designing the front end of the pipe instead of the tail end," said Kathryn Parent of the American Chemical Society's Green Chemistry Institute.

One important aspect is reducing the amount of petroleum that goes into everyday products. Roughly 5 percent of the oil used in this nation ends up in things like plastics, clothes, paint, and beauty products rather than in a gas tank, according to the Department of Energy.

An example of a petroleum-derived product is polyurethane foam found in furniture and beds. Cargill, Inc. of Wayzata, MN, was awarded a 2007 Challenge Award for its technique to make polyurethane with a renewable feedstock such as vegetable oil. The new process reduces total energy use by 23 percent and carbon dioxide emissions by 36 percent.

Another important principle in green chemistry is avoiding toxic ingredients. Plywood, for instance, is commonly held together with adhesives made from formaldehyde, which is thought to cause cancer.

Kaichang Li of Oregon State University has designed a new plywood adhesive made by combining soy flour with a natural glue made by rock-clinging mollusks. In 2006, Columbia Forest Products in Portland replaced 47 million pounds of formaldehyde-based adhesives in its plywood with this soy alternative.

Another award winner, Headwaters Technology Innovation in Lawrenceville, NJ, has synthesized hydrogen peroxide without the usual hazardous chemicals. This could result in less use of chlorine, an environmentally-unfriendly chemical found in household bleach.

The last two Challenge Awards went to NovaSterilis Inc. for its non-toxic sterilization technique, and Michael Krische of the University of Texas at Austin for creating a new class of organic reactions that minimize waste products.