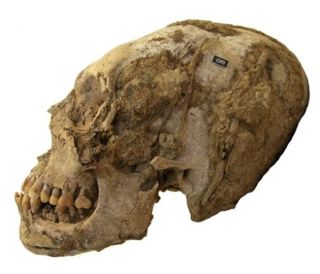 Several deformed corpses were found during recent excavations at the burial necropolis of El Trigal, a once-downtrodden community located in the Nazca province of Peru and dating to the 1st century A.D.

Members of nearby wealthier communities looking to send a message about their power may have been responsible for the mutilations, say archaeologists.

"When a dominant class appears, [it] always seeks mechanisms to impose fear," said Pedro Castro-Martinez of the Universitat Autonoma de Barcelona (UAB), who headed up a study of the corpses. "The power of an elite is exercised and maintained by means of force and fear. Mutilations can be part of those tactics to frighten.

Tombs at the El Trigal necropolis are very simple and indicate increasing poverty that coincided with the emergence, about 2,000 years ago, of the neighboring town of Cahuachi as a powerful conglomeration of upper-class aristocrats.

Most pointedly, several bodies at El Trigal—including the grave of one woman who was buried with a pair of severed legs and feet not belonging to her—showed signs of violence.

"The case of dismembered legs at El Trigal is not conclusive [of violence] due to its poor conservation," he told LiveScience. "But we know other cases of dismemberments, mutilations and decapitations in the Peruvian Coast of this epoch."

Finding conehead individuals at El Trigal—achieved by binding the skull with bandages from a young age–is a bit of a mystery, said Castro-Martinez, since it was a practice usually reserved for babies of wealthy lineage and El Trigal was a lower-class community.

Castro-Martinez rejected that the binding was another intimidation tactic used by the powerful of Cahuachi, however.

"[It could be] an individual of an aristocratic lineage excluded of his/her rights, a practice of deformation independent of aristocratic lineage, or a deformation associated to certain activities" for which the child was being prepared, he said, explaining that even in this apparently violent society, children were rarely harmed in such a way.

These latest discoveries are part of The Puntilla Project, a wider study of the archaeological remains of villages throughout the Nazca province conducted by the UAB and the University of Almeria, also in Spain.