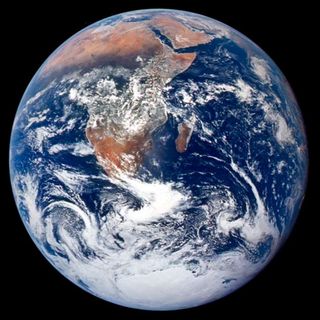 The original Blue Marble photo was taken on Dec. 7, 1972. The original NASA caption: View of the Earth as seen by the Apollo 17 crew traveling toward the moon. This translunar coast photograph extends from the Mediterranean Sea area to the Antarctica south polar ice cap. This is the first time the Apollo trajectory made it possible to photograph the south polar ice cap. Note the heavy cloud cover in the Southern Hemisphere. Almost the entire coastline of Africa is clearly visible. The Arabian Peninsula can be seen at the northeastern edge of Africa. The large island off the coast of Africa is the Malagasy Republic. The Asian mainland is on the horizon toward the northeast.

Scientists have found that oxygen and the life that generates it might have enriched the Earth far earlier than currently supposed.

The discovery, sure to be controversial, suggests life could arise earlier than now thought on alien planets, too.

Currently, scientists widely believe photosynthetic microbes helped oxygenate the planet roughly 2.4 billion years ago, and that oxygen was scant in the atmosphere before then. They base this idea on isotopes of sulfur in ancient rocks. Isotopes of sulfur all behave virtually the same chemically but have slightly different masses.

Rocks older than 2.4 billion years contain abnormal ratios of sulfur isotopes compared with younger rocks. The only way known to generate these abnormal ratios are reactions between sunlight and sulfurous volcanic gas in the absence of an ozone shield that would normally help screen out ultraviolet rays.

Ozone is a form of oxygen, and if the atmosphere has no ozone, it is assumed it has no oxygen.

Geochemist Hiroshi Ohmoto, director of the Penn State Astrobiology Research Center and his colleagues examined rocks from western Australia laid down as sediments on a lakebed and the ocean floor between about 2.76 and 2.92 billion years ago. These displayed sulfur isotope ratios like those of more modern rocks from higher oxygen eras.

"'When did the Earth's atmosphere become oxygenated?' has been an important question for Earth scientists and biologists, because this question is closely linked to those related to the biological evolution on Earth and other planets," Ohmoto told LiveScience. "According to the currently popular theory, it took the Earth for more than 2 billion years to develop an oxygen-rich atmosphere."

An implication of the new findings is that "an oxygen-rich atmosphere, generated by oxygen-producing organisms, may be found in young, as well as old, planets of other stars," he said.

Earth formed about 4.5 billion years ago. Nobody knows exactly when or how life began or how quickly it altered the planet's chemistry.

The new findings could mean oxygen levels on Earth were uniformly high since 3.8 billion years ago, Ohmoto said. They could also mean oxygen levels went through yo-yo fluctuations between highs and lows. Alternatively, ultraviolet radiation from the sun might not be the only way that can generate the abnormal ratios of sulfur isotopes seen in older rocks.

"There is going to be a howl, even outrage," over these findings, geologist and isotope geochemist Paul Knauth at Arizona State University told LiveScience. They will say hot springs could have swamped the rocks Ohmoto and his colleagues looked at with normal sulfur, or that the crystals they analyzed washed in from elsewhere, or that their measurements are inaccurate, he said. However, Knauth noted Ohmoto and his colleagues did address these points "and make good arguments."

Ohmoto and his colleagues report their findings in the Aug. 23 issue of the journal Nature.