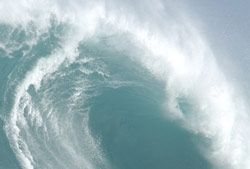 The warning system covering the Pacific Ocean might save many lives if a tsunami strikes Southern California. But nothing can stop the destruction.

A new study puts the price tag for a worst-case scenario at $42 billion, and that does not include billions of dollars in additional damage caused directly by an earthquake that is pegged as the likely source of a potentially devastating tsunami.

And there might not be enough time for a warning to be very useful.

The scientists say an underwater landslide just offshore, triggered by an earthquake, could generate a tsunami whose tallest waves would arrive "only one minute after the slide."

Other studies have the Pacific Northwest could be hit swiftly by devastating tsunamis, too. And researchers recently warned of a similar danger to Gulf Coast states. Prior to the tsunami last December, other geologists warned of the risk of mega-tsunamis around the entire Pacific basin from underwater landslides.

The new research was done by geologists, tsunami experts, engineers and urban planners at the University of Southern California. It is detailed in April edition of Civil Engineering magazine.

The group cites recent studies that suggest a large earthquake under the ocean off Los Angeles is likely at some point in the future. And it does not take a 9.0 "great quake," such as the one last December in Indonesia, to do the trick. A magnitude 7.0 earthquake near Papua New Guinea in 1998 generated deadly waves thought to be caused by a submarine landslide, which the earthquake triggered.

"The shaking from an earthquake of magnitude 7 or greater on an offshore thrust or reverse fault would undoubtedly be damaging to coastal communities [in Southern California], and its effect could be greatly magnified if it were to generate a tsunami," the scientists write.

The conclusions draw on evidence from several locally generated small tsunamis that have been recorded over the past 200 years. A Santa Barbara earthquake in 1812 spawned a moderate tsunami that affected more than 37 miles (60 kilometers) of coastline. Evidence of prehistoric events suggest submarine slumps that could have generated tsunamis up to 66 feet (20 meters) tall.

"There will be others," the researchers say, though of course they don't know when or how tall any tsunami might be.

Various scenarios in the study generate loss estimates of between $7 billion and $42 billion directly related to the tsunami. Costs include direct damage as well as the economic costs of lost shipping opportunities and traffic delays owing to damaged freeways.

"We chose not to model fatalities because we were being deliberately conservative, and because we wanted to avoid contentious assumptions about the economic value of life," said study member James Moore II. "The Papua New Guinea tsunami of 1998 was generated by a mechanism similar to the one modeled here, and that event cost over 2,000 lives. The toll here could be much higher."