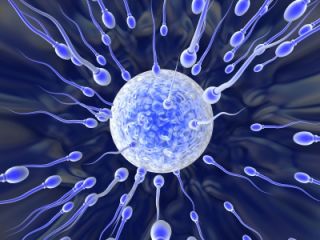 Women who drink while pregnant may not only be putting their child at risk for a number of birth defects, they might also be damaging the fertility of their future sons, a new study suggests.

Danish researchers found that if mothers drank 4.5 or more drinks a week while pregnant, the sperm concentration of their sons, measured about 20 years later, was a third lower in comparison to men who were not exposed to alcohol while in the womb. A drink was measured as 0.42 ounces (12 grams) of alcohol, which is the equivalent to one 11 oz. (330 ml) beer, one small 4 oz. (120 ml) glass of wine or one glass of spirits 1.3 oz. (40 ml).

"Our study shows that there is an association between drinking a moderate amount of alcohol (about four to five drinks a week) during pregnancy and lower sperm concentrations in sons," said study researcher Cecilia Ramlau-Hansen, of Aarhus University Hospital in Denmark. "However, because this is an observational study we cannot say for certain that the alcohol causes the lower sperm concentrations. It is possible that drinking alcohol during pregnancy has a harmful effect on the fetal semen-producing tissue in the testes — and thereby on semen quality in later life," she said.

Either way, more research is needed to confirm the link, she added.

Ramlau-Hansen and her colleagues studied 347 sons of 11,980 women with singleton pregnancies between 1984 and 1987. Around the 36th week of pregnancy, the mothers answered a questionnaire on lifestyles and health. The sons were followed up between 2005 and 2006, when they were aged between 18 and 21, and semen and blood samples were collected and analyzed.

The sons were divided into four groups ranging from those who were least exposed to alcohol (their mothers had drunk less than one drink a week) to those whose mothers drank 1-1.5 drinks a week, 2-4 drinks a week, or 4.5 or more drinks per week.

Paradoxically, the semen volume and total sperm count (rather than concentration), both of which affect a man's fertility, were highest in sons whose mothers drank 1 to 1.5 drinks a week.

However, the result "is not surprising and is quite a common finding when studying alcohol," Ramlau-Hansen said. "It could indicate that small amounts of alcohol have a beneficial effect — for example, on the semen-producing tissue in the fetal testes — but, in fact, we believe this result may be biased by the characteristics of the women drinking small amounts of alcohol during pregnancy or by inaccurate reporting of alcohol consumption. Therefore, it is not possible to draw a firm conclusion from this result," she said.

There was no association between the fathers' total alcohol intake and the sons' semen quality, the researchers say. This further suggests the lower sperm concentration is not influenced by shared lifestyle factors of the parents, Ramlau-Hansen said.

The results were presented June 29 at the 26th annual meeting of the European Society of Human Reproduction and Embryology in Rome.