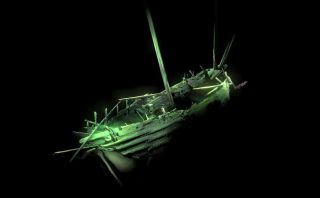 This ancient shipwreck that likely dates back to the 15th or 16th century is very well-preserved.
(Image: © Deep Sea Productions/MMT)

An incredibly well-preserved ancient shipwreck has been uncovered in the Baltic Sea.

Though it likely dates back to 500 to 600 years ago, "it’s almost like it sank yesterday," Rodrigo Pacheco-Ruiz, a maritime archeologist with the survey specialists MMT, said in a statement. The ship was first discovered using sonar —which uses sound waves to detect objects — by the Swedish Maritime Administration back in 2009.

But Pacheco-Ruiz and his team, in collaboration with the Centre for Maritime Archeology at the University of Southampton in England, recently led an archeological survey of the wreck using underwater robots. [The 20 Most Mysterious Shipwrecks Ever]

The survey revealed that the ship likely dates to the 15th to early 16th centuries. Though it looks tattered, it is still largely intact. The masts of the ship were still in place and the hull is complete. On the main deck, leaning against the main mast, the scientists found a small boat that was likely used to transport the crew to and from the ship. They also found swivel guns on the main deck, some still neatly packed away in gun ports. Two swivel guns were still aimed in the firing position, The Independent reported.

"This ship is contemporary to the times of Christopher Columbus and Leonardo Da Vinci, yet it demonstrates a remarkable level of preservation after five hundred years at the bottom of the sea," Pacheco-Ruiz said. It's very well-preserved due to the cold, slightly salty waters of the Baltic Sea, he added.