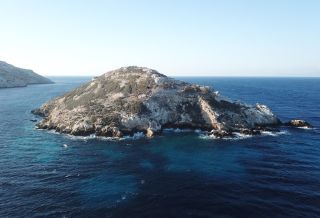 Dhaskalio, shown here, is a small island that is naturally shaped like a pyramid.
(Image: © Michael Boyd)

News of a 4,600-year-old "pyramid" or "pyramid island," supposedly discovered on a Greek island in the Aegean Sea, has been making the rounds online.

Turns out, what these news reports referred to as a pyramid was not like another Great Pyramid of Giza but rather a tiny island, scholars who are excavating the site told Live Science.

We talked with these experts — and obtained a bevy of pictures and documents detailing the excavations — and found that, although the site isn't really a pyramid, it did result in many interesting discoveries. [See Photos of the 'Pyramid' Island and Excavation]

Called Dhaskalio, this little island is located about 90 meters (295 feet) west of the island of Keros. When Dhaskalio was taking shape 4,600 years ago, sea levels were lower, and the island was part of Keros, the researchers said.

Dhaskalio is naturally shaped like a pyramid; in addition, ancient people had built a series of walls on the island, making it look a bit like a step pyramid.

"The island is naturally pyramid-shaped, but one should not refer to the island as a pyramid — a pyramid is a completely artificial construction," said Michael Boyd, a senior research associate at the McDonald Institute for Archaeological Research at the University of Cambridge and co-director of excavations at the site.

On Dhaskalio, Boyd and his colleagues found a series of buildings, stairways, walls and a drainage system — evidence of sophisticated urban settlement, they said. Many of the structures were made of marble that had been imported from an island called Naxos, about 6 miles (10 kilometers) from Dhaskalio.

The archaeologists also found casts that were used to create a variety of metal tools, including axes, chisels, spearheads and daggers; they also found copper slag from smelting on potsherds.

The settlement at Dhaskalio appears to have been located next to a sanctuary that flourished at the same time, the archaeologists said. On the shores of Keros, which was connected to Dhaskalio, archaeologists have found a trove of broken marble sculptures, figurines and pottery. Some of the sculptures and figurines show depictions of people with crossed arms. The archaeologists think that these items were manufactured and intentionally broken on other islands before being transported to Keros and deposited near the sanctuary.

Researchers are trying to learn more about this figurine-breaking ritual. "We have no evidence at all for deities at the sanctuary, so it is best to think of the ritual practices being directed at the supernatural, more broadly conceived, as well as at the wider community," Boyd said.

The settlement at Dhaskalio and the nearby sanctuary appear to have been in use for about 400 years before being abandoned, the researchers said. But who, exactly, lived at Dhaskalio is still a mystery.

"The site was occupied for over 400 years,so 'who' would have lived there must have changed over time, but mainly, at the moment, we are focusing on those practicing intense craft activities [manufacture of metal tools] at the site around 2600-2500 B.C.," Boyd told Live Science.