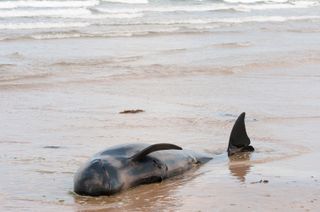 Pilot whales are known for their mass strandings. This one was part of a mass stranding in Ireland.
(Image: © Stephen Barnes/Shutterstock)

After dozens of pilot whales beached themselves on St. Simons Island, Georgia, yesterday evening (July 16), concerned beachgoers, lifeguards and wildlife officials sprang into action, doing their best to maneuver the whales back into the water.

"While stranding is a known natural occurrence, the only thing we can do is to continue pushing them out to sea," Clay George, a wildlife biologist with Georgia's Department of Natural Resources (DNR), said in a statement.

Dixie McCoy, a beach visitor and resident of St. Simons Island, posted a heartbreaking video on Facebook that shows the whales struggling to get back in the water. "How the heck did so many get washed up over here?" someone asked.

"All these whales have been washed up to shore and there's already been one whale that's been attacked by a shark," McCoy said in the video. "It is so sad."

McCoy estimated there were around 40 animals on the beach, but the local news agency WJCL reported there were more than 50 beached whales. People of all ages put forth a valiant effort, working together to push most of the distressed marine mammals back out to sea.

"I tell you what, Glenn County came together on this one," McCoy said.

But despite the beachgoers' remarkable achievement, some of the whales returned to the beach. At least two of the whales died and were taken to be necropsied, Georgia DNR reported. The remaining whales were last seen swimming close to shore, and wildlife officials hope the whales continue moving out to sea.

Why did they strand?

Pilot whales are one of the largest members of the dolphin family, second only to the killer whale in size, according to the American Cetacean Society (ACS). The whales that stranded in Georgia were likely short-finned pilot whales (Globicephala macrorhynchus).

Both species of pilot whales are very social and travel in groups of 20 to 90 individuals, and it's not unusual for the large groups to strand together. The largest documented stranding of pilot whales happened in 1918, when an estimated 1,000 whales beached themselves at the Chatham Islands, 497 miles (800 km) east of the South Island of New Zealand, according to the country’s Department of Conservation.

But why the whales exhibit this deadly behavior remains a mystery to scientists.

The most agreed-upon hypothesis is that the whales' echolocation isn't as effective in shallow, near-shore waters as it is near the steep underwater cliffs at the edge of the continental shelf, according to New Zealand's Department of Conservation. Like other cetaceans, pilot whales use echolocation to find their prey — primarily squid. It's possible that when the whales follow prey closer to shore, the whales become disoriented and are unable to find their way back to sea before beaching themselves.

It's also possible that the whales' social tendencies mean that when one whale washes ashore, others follow to help out, only to get stuck themselves. It could also be a combination of factors that causes the animals to strand, but those reasons remain unknown.