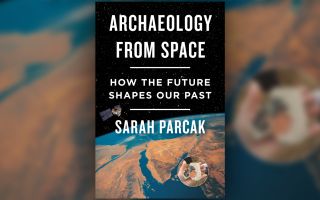 Author and scientist Sarah Parcak shares a view of archaeology that originates thousands of miles above Earth.
(Image: © Courtesy of Henry Holt and Company/Metropolitan Books)

Archaeologist Sarah Parcak studies lost cities of the ancient world. But unlike the fictional archaeologist Indiana Jones — and generations of real-world archaeologists — Parcak peers at temples, pyramids and other remnants of the distant past from great heights, scanning the ground with satellite technology orbiting at altitudes thousands of miles above Earth.

A pioneer in this relatively new field of so-called space archaeology, Parcak shares some of her biggest discoveries in a new memoir, "Archaeology From Space." Her book outlines how aerial views have transformed her field, revealing hundreds of sites that were previously unknown. The lives of people from millennia ago still have much to teach us, and new methods for studying the past — particularly civilizations that succumbed to a changing climate — can uncover important lessons for humanity's future.

Below is an excerpt of "Archaeology From Space: How the Future Shapes Our Past," published by Henry Holt and Company on July 9, 2019.

The Scope of Space Archaeology

The human story—the story of us—is evolving at breakneck speed thanks to new technologies. Armed with new data sets, we can spin fresh tales that bring us closer to getting more right than wrong about our ancestors and ourselves.

What we can find with new technologies such as satellite imagery is simply astounding. It is helping us rewrite history. We’ve gone from mapping a few dozen ancient sites in one summer-long archaeological season to mapping hundreds, if not thousands, of sites in weeks. With advances in computing and artificial intelligence, we are on the verge of achieving those same results in a few hours.

In case you want to be an archaeologist and are worried that we space archaeologists will find everything first, fear not. Knowing the location of an ancient site is only the first step. We still have to survey sites on the ground, a process known as ground-truthing, and then undertake years of excavation to get a better understanding of what is there. And wow, do we have a lot of work to do.

To give you a sense of just how much, and how quickly this field is advancing, I saved writing this introduction until last, to make sure to include any hot-off-the-press discoveries made with satellite technologies. With the chapters done and edited, I thought I could get away with a bit of downtime between big announcements. Dream on, Parcak.

In a recent Nature publication, a team led by archaeologist Jonas Gregorio de Souza announced 81 previously unknown pre-Columbian sites in the Amazon basin area of Brazil, using satellite imagery and ground surveys. Based on their findings, they estimated 1,300 other sites dating to between 1250 and 1500 AD in just 7 percent of the Amazon basin, with potentially more than 18,000 others in total. More than a million people may have lived in areas that today seem largely inhospitable.

Their findings included ceremonial centers, large platform mounds, ringed villages, and fortified settlements in north-central Brazil’s upper Tapajós Basin, where few archaeologists had ventured.3 To me, what is extraordinary about this discovery is just how much archaeologists and others had taken for granted about what might, or might not, be there in the rainforest. Satellite data allowed the archaeological team to search large areas in a matter of months, when the job would have taken decades on the ground. All this, from a subfield that barely existed 20 years ago. Although the world is learning more, there’s still a way to go in popular understanding. In a recent travel insurance application for my work abroad, I was quoted an insanely high price for one year of coverage, over $50,000. When I inquired why, the team admitted they thought I traveled into space to look down from the actual satellites for ruins. I’m still laughing.

As I write this, I am downloading brand-new satellite imagery of Giza, in Egypt, the site of the last standing wonder of the ancient world. Who knows if I’ll find anything previously undiscovered there. The main thing I have learned is to expect the unexpected. New sites and features appear where you hadn’t previously thought to look, or, in cases like Giza, have the potential to overturn long-held assumptions about major sites and time periods. In the following chapters, you’ll read about projects that did just that.

Mapping sites from space is fun, but getting to explore them is what takes me back in time, often thousands of years, to eras when people believed in different gods, spoke languages now extinct, and lived in places assumed never to have been inhabited—but they were all Homo sapiens sapiens. Just like us.

As such, archaeology has the potential to inspire in us great wonder, bringing us together. Today, given the conflicts and unrest around the world, this is very much needed. Some people don’t get the chance to experience that sense of awe in person at ancient sites, but I hope the stories shared here will give a sense not only of this, but of how much we assume about past peoples, and how wrong we have sometimes been, given our access to such fragmented information.

There aren’t any papers published yet on whether remote sensing can complete the puzzle of what it means to be human and how to avoid the pitfalls of great civilizations that came before us. All I can say is that there is extraordinary wisdom to be learned from previous cultures. It’s shaped me profoundly and allows me to place current events in the long arc of perspective. For more than 300,000 years, our ancestors have migrated across Planet Earth, surviving and, in some cases, thriving—being creative, bold, innovative, and, of course, destructive.

This story of space archaeology, its contributions to research, and the tales it helps us tell, only introduces the possibilities of the science. The scale of these new stories, however, should amaze and inspire us. In our history on Earth, humans have habitually pushed deeper into the unknown; as we now begin to focus on exploring Mars, and farther afield, we can imagine 100,000 years from today, when there will be literal space archaeologists traveling from planet to planet, exploring the remnants of our early settlement efforts in other galaxies.

The origins of their field will be many light-years away, but the questions will remain close to those we ask today, about people who came before us. The answers matter far less than those questions. Perhaps it’s a start to understanding what makes us human: our ability to ask how, where, when, why, and who, and creating the tools we need to bring the answers to life, on Earth, looking down from outer space.