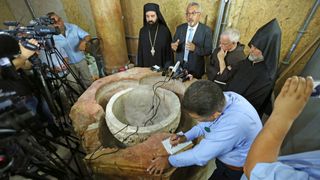 Ziad al-Bandak, head of the Restoration Commission for the Church of the Nativity in Bethlehem, West Bank, reveals an ancient baptismal font discovered inside another, newer font. The newfound font is estimated to date from 501 to 600 A.D.
(Image: © Credit: Wisam Hashlamoun/Anadolu Agency/Getty)

The Church of the Nativity — a World Heritage site believed to house the birthplace of Jesus in the West Bank city of Bethlehem — is apparently so holy that there are baptismal fonts coming out of the baptismal fonts.

In a news conference earlier this week, Ziad al-Bandak, head of the committee tasked with restoring the famous church, announced that archaeologists had discovered a baptismal font (a basin of water used for baptisms) dating to the 6th or 7th century A.D. hidden inside another, older baptismal font, the Palestinian news site Wafa.pn reported.

According to al-Bandak, the newly discovered font appears to be made of the same sort of stone as the church's columns, meaning it could be nearly as old as the church itself, which dates to the 4th century A.D.

Few other details about the object are available at this time, but al-Bandak noted that experts from the Palestinian Ministry of Tourism and Antiquities and abroad have been invited to study the font and get a better sense of the church's history. [In Photos: The Birthplace of Jesus]

The Church of the Nativity has been under renovation since 2013, and the project has already turned up some surprise treasures, including a gorgeous Byzantine angel mosaic uncovered by Italian researchers in 2016.

Originally commissioned around the year A.D. 326, the church stands atop a grotto that has been considered the traditional birthplace of Jesus since the 2nd century A.D. The church remains open during the renovations, and continues to attract pilgrims and tourists from around the world.