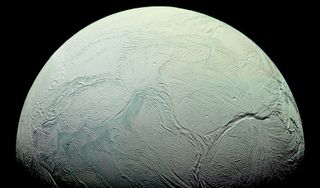 BELLEVUE, Wash. — In the middle of the Atlantic Ocean, an underwater mountain is dotted with chimneys that spew hot water and minerals from deep below.

This group of chimneys, collectively called the "Lost City," is teeming with life — and scientists think that what powers them might also fuel life elsewhere in the universe, William Brazelton, a biologist at the University of Utah, said Tuesday (June 25) during a talk at the 2019 Astrobiology Science Conference.

Just what is that process?

Called serpentinization, "it's the process by which the pretty green rock turns into the ugly black rock," Brazelton said. When green olivine, the rock that makes up Earth's mantle, is exposed to water, it reacts with the water's hydrogen and oxygen molecules, and releases high-energy hydrogen gas. This gas is great fuel for microbes. [In Photos: Spooky Deep-Sea Creatures]

"It's the closest thing you can come to a free lunch in the universe," Brazelton told Live Science. "You make a rock wet and you get food."

Microbes of the Lost City

Last September, Brazelton and his team took a cruise on the "R/V Atlantis" to the Lost City, which sits upon the underwater mountain called Atlantis Massif.

"The Lost city is the clearest, most dramatic, most beautiful example of a hydrothermal chimney that doesn't seem to be powered by magma," he said.

This microbial metropolis is still a bit of a puzzle for scientists.

"In comparison to other sites on earth where serpentinization is occuring, the Lost City seems to be the one that has the richest microbial life," he said. But, "it's not obvious why." To answer that question, during the last expedition, Brazelton's team sent a remotely operated vehicle (ROV) to collect fluid samples from the vents, which they are currently analyzing.

The scientists hope to better understand how serpentinization powers life, and which organisms are the keystone species. It's likely that one or two key species that help the rest of the microbial community survive, he said.

When the researchers try to create the exact same conditions of the Lost City in the lab, they always come up short. The City has areas of high pH and high temperature, which according to lab results, "might be poison for life." Yet, life down there seems to have found a way.

Chimneys of the deep

When hydrothermal vents were discovered in the late 1970s, astrobiologists were excited, Brazelton said. That is because "it represented a second kind of energy for life." Planets that might not have great access to sunlight could still harbor life, he said.

In the years that followed, scientists found evidence that other water worlds, such as Saturn's sixth largest moon — Enceladus — has similar hydrothermal vents. Most of these water worlds, unlike our planet, probably don't have enough magma to power these chimneys, he said. But they do have the ingredients needed for serpentinization to occur — these worlds are composed of the same iron-based rocks found in Earth's mantle and they are surrounded by water, he added.

"We have pretty good clues as to what [these water worlds] are made of," said Marc Neveu, a research scientist at NASA Goddard Space Flight Center who wasn't a part of the talk but who researches Enceladus.

It's definitely possible that serpentinization is fueling hydrothermal vents on these distant water worlds, Neveu told Live Science. However, those vents may not resemble the chimneys on Earth, he said.

If that's the case, our alien world and the microbes that live in it may not exactly mimic other alien worlds.

Editor's Note: This story was updated to note that the talk occurred on Tuesday, June 25.