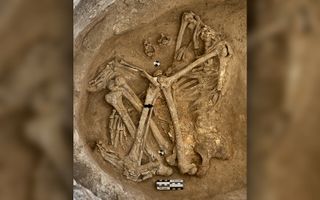 Skull removal – a Neolithic custom – was found in a number of burials at the Çatalhöyük site in Turkey.
(Image: © Image courtesy of the Çatalhöyük Research Project/Jason Quinlan)

About 9,000 years ago, Neolithic people whose ancestors were once isolated foragers were living packed so tightly together in a bustling town in what is now Turkey that they had to climb into their homes through the roofs.

In part, that's why the violence began.

Archaeologists recently discovered that the transition from foraging to a more communal farming lifestyle raised significant challenges for people who lived at Çatalhöyük, a 32-acre site in southern Turkey that was occupied from 7100 B.C. to 5950 B.C. Çatalhöyük was home to as many as 8,000 people at its peak, and is one of the earliest known cities.

That overcrowding and other factors created a highly stressful environment. And for Çatalhöyük's Neolithic occupants, stress found an outlet in brutal violence, including bashes to the backs of heads with projectiles, scientists reported in a new study. [25 Grisly Archaeological Discoveries]

Recently, archaeologists compiled 25 years of data gathered from the remains of 742 individuals at Çatalhöyük. In the preserved evidence of more than 1,000 years of Neolithic life, the scientists discovered "a compelling record of elevated levels of interpersonal violence" triggered by the stress of city living, the researchers wrote in the study.

The scientists found that the number of injuries, evident in skeletons, increased when the community was at its largest, suggesting that as Çatalhöyük's population boomed, violence became more frequent. About 25% of the 95 examined skulls showed healed injuries made by small spherical projectiles, probably a clay ball flung by a slingshot. Many of these clay spheres were also preserved around the site, according to the study.

The majority of the victims were women, and they appeared to have been struck from behind; 12 of the skulls had been fractured more than once, the scientists reported. [In Photos: The Life and Death of Ancient 'Urbanites' in Çatalhöyük]

Disease was also rampant in Çatalhöyük when the city was at its most crowded, with around 33% of the human skeletons showing signs that hinted at bacterial infection. During that same period, approximately 13% of the women's teeth and 10% of the men's teeth were riddled with cavities — the result of a diet rich in grains.

In order to accommodate thousands of people, homes were constructed so close together that residents had to enter by first climbing a ladder to the building's roof and slipping inside; living in such close proximity could have boosted the spread of deadly pathogens, said lead study author Clark Spencer Larsen, a professor of anthropology at The Ohio State University.

What's more, interior walls and floors of dwellings bore the residue of human and animal feces, which could also have made people sick, Larsen said in a statement.

"They are living in very crowded conditions, with trash pits and animal pens right next to some of their homes," Larsen said. "So there is a whole host of sanitation issues that could contribute to the spread of infectious diseases."

Measurements of leg bones showed changes over time. This told the scientists that during the city's later years, its residents needed to walk more, perhaps because nearby resources were growing scarce. Along with rising incidents of disease, this could also have placed significant pressure on Çatalhöyük's communities, creating a powder keg of latent violence that, in desperate people, could swiftly ignite.

"Çatalhöyük was one of the first proto-urban communities in the world and the residents experienced what happens when you put many people together in a small area for an extended time," Larsen said in the statement. Though Çatalhöyük was abandoned nearly 8,000 years ago, the remains of this once-teeming urban outpost grimly foreshadow many of the same conflicts and trials endured by city dwellers today, the researchers concluded.

"It set the stage for where we are today and the challenges we face in urban living," Larsen said.

The findings were published online June 17 in the journal Proceedings of the National Academy of Sciences.