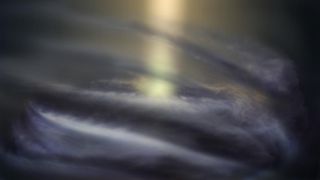 An artist's impression of a cool ring of hydrogen gas that circles around our supermassive black hole.
(Image: © NRAO/AUI/NSF; S. Dagnello)

Astronomers, for the first time, have snapped an image of a cool, gassy ring swirling around the supermassive black hole at the center of our galaxy.

This ring is part of the so-called accretion disk — stars, dust and gases — that surround most black holes. These materials are held close by the black hole's strong gravitational grip and the far edge represents the outer limits of its gravitational reach. In the case of the Milky Way's black hole called Sagittarius A*, the disk extends out a few tenths of a light-year from the black hole's event horizon — the point at which even light can't escape the black hole's grasp. [9 Ideas About Black Holes That Will Blow Your Mind]

There are a few types of gases that make up parts of this accretion disk, and scientists previously have only imaged the very hot, glowing ones, according to a statement from the National Radio Astronomy Observatory. Because these gases are so hot — at about 18 million degrees Fahrenheit (10 million degrees Celsius) — they give off X-rays that researchers could easily detect.

But this accretion disk also has cooler hydrogen gas — 18,000 F (10,000 C) — though it hasn't been imaged before. The radiation in the area causes hydrogen atoms to constantly lose and gain their electrons, an activity that releases weak radio waves, according to the statement.

The team detected these radio waves using the Atacama Large Millimeter/submillimeter Array (ALMA) observatory in Chile, and stitched the measurements together into the new image.

The cool hydrogen ring is about a hundredth of a light-year away from the black hole's event horizon, and contains an amount of hydrogen equivalent to a tenth of the mass of Jupiter, according to the statement. What's more, because of the so-called "Doppler effect," which makes light from objects moving toward our planet look slightly "bluer" and light from objects moving away from our planet look slightly "redder," the researchers concluded that the gas is rotating around the black hole.

"We hope these new ALMA observations will help the black hole give up some of its secrets," lead author Elena Murchikova, an astrophysicist at the Institute for Advanced Study in Princeton, New Jersey, said in the statement.

The researchers reported their findings June 5 in the journal Nature.