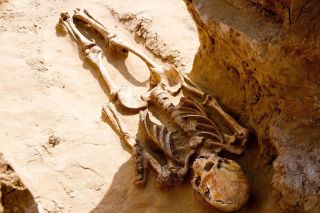 Here, one of the 2,500-year-old skeletons discovered in a kurgan in Russia.
(Image: © Ministry of Culture and Tourism of the Astrakhan Region)

A farmer in Russia has uncovered the remains of three elite members of a nomadic tribe from 2,500 years ago. A horse's skull and harness were found buried alongside one of the individuals.

Three 2,500-year-old burials of elite members of a group known as the Sarmatians have been discovered within a kurgan (a large mound) in a village called Nikolskoye located northwest of the Caspian Sea in Russia.

The three skeletons were discovered inside the remains of wooden coffins within the kurgan. [See Photos of the Burials and Skeletons from the Nomadic Tribe]

Though the kurgan had been robbed in ancient times, many artifacts such as weapons, gold jewelry and household items (such as a bronze cauldron) were discovered near the coffins, according to two Russian language statements released by the Astrakhan regional government.

The three burials date back to a time when the Sarmatians flourished in the region. This nomadic group thrived in southern Russia, before moving into eastern and central Europe while fighting wars against other ancient peoples such as the Scythians, Romans and Goths.

Rustam Mudayev discovered the kurgan after noticing a bronze cauldron while working on a farm. Mudayev reported the discovery to authorities, and a team led by Georgiy Stukalov, an archaeologist at the Astrakhan State Museum, excavated the site.

Excavation of the kurgan and analysis of the remains is ongoing. They have yet to determine how the individuals died or their gender and age.

Kurgans have frequently popped up throughout Russia and neighboring countries over the last century; they often contain the burials of elite members of ancient groups.

Archaeological remains from the newly found kurgan are being taken to the Astrakhan State Museum, the statements said.