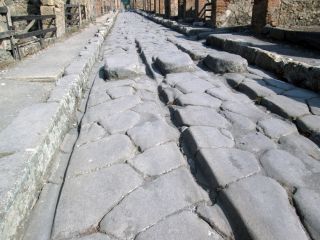 The passage of carts over decades could cause ruts (like the one shown here), particularly in high-traffic areas of Pompeii.
(Image: © Eric Poehler)

Ancient workers used molten iron to repair Pompeii's streets before the historic and devastating eruption of Mount Vesuvius in A.D. 79, a team of archaeologists has discovered.

The discovery reveals a previously unknown method of ancient Roman street repair and represents "the first large-scale attestation of the Roman use of molten iron," wrote researchers Eric Poehler, a classics professor at the University of Massachusetts Amherst; Juliana van Roggen, an independent researcher; and Benjamin Crowther, a doctoral student at the University of Texas at Austin, in a paper recently published in the American Journal of Archaeology.

When Mount Vesuvius erupted, it covered the city in ash and lava; though the eruption killed many of Pompeii's inhabitants, it also preserved the city in time. [Pompeii Photos: Archaeologists Find Skeletal Remains of Victims of Vesuvius Eruption]

Many of Pompeii's streets were paved with stone, but during a survey in July 2014, archaeologists found that over time, the passage of carts eroded those stones to form deep holes, or ruts. Repaving streets was an expensive and time-consuming process, historical records and archaeological remains show.

"One option for repair, complete repaving in stone, was a difficult and expensive endeavor that might block important through-routes in a city for months," the researchers wrote in their paper.

This posed a problem for the people of Pompeii, since some of the city's many streets could become eroded quickly. "Investigations at Pompeii have shown that particularly high volumes of traffic concentrated in narrow streets could wear down even a stone-paved surface in only a few decades," the researchers wrote.

The team found that "the Pompeians devised another option [for street repair] that was ingenious and unconventional: after heating iron or iron-rich slag to a molten state, they poured out hundreds of individual repairs onto, into and below the paving stones of the city's most important streets," the researchers wrote.

After the molten iron was poured, it filled the holes and hardened as it cooled down. In addition to iron, other materials such as stone, ground-up pieces of terracotta and ceramics were also inserted into the holes to help fill them up. This method of repair was cheaper and faster than repaving a street, researchers found.

"How the Romans introduced liquefied iron material into the streets at Pompeii remains a mystery," the researchers wrote.

The Romans would have needed to heat up iron or iron slag to between 2,012 and 2,912 degrees Fahrenheit (1,100 to 1,600 degrees Celsius), depending on the type of iron being melted, the researchers wrote, noting that reconstructed Roman furnaces can reach these temperatures.

Researchers found numerous examples of iron drops on sections of streets that didn't require repair, which suggests that molten iron was sometimes accidentally spilled while being carried onto Pompeii's streets.

It's likely that slaves carried the molten iron through Pompeii, Poehler said in an email, noting that Roman cities had public slaves, and magistrates (senior officials who held power in Roman cities) could have used their own slaves to perform tasks like street repair.

Next, the researchers hope to analyze the chemistry of the iron to figure out where it was mined. There are also more streets in Pompeii to survey, they said.