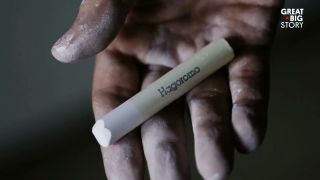 A type of blackboard chalk that was produced for decades by just one factory in Japan was so highly prized by mathematicians they referred to it as "the Rolls-Royce of chalk."

And when rumors surfaced about the chalk being discontinued, some academics resorted to stockpiling as many boxes as they could get their chalk-covered hands on.

The tale of Fulltouch chalk, manufactured by Hagoromo Stationery in Nagoya, Japan, and thought by many to be the finest chalk in the world, was recently featured in a short video, shared on YouTube on May 2 by Great Big Story.

Hagoromo made chalk for more than 80 years, and for those who weren't lucky enough to live in Japan, Fulltouch was always difficult to get. Then, as Hagoromo prepared to shut down in 2015, many dedicated aficionados began grimly preparing for a world without Fulltouch. They bought dozens upon dozens of boxes, some hoarding enough chalk to last through the end of their careers, according to the video. [5 Seriously Mind-Boggling Math Facts]

What is so special about this chalk? Mathematicians in the video described Fulltouch in glowing terms. The chalk is long-lasting, virtually unbreakable, bright and easy to read on a chalkboard, smooth as butter to write with, and practically dustless, Jeremy Kun, a Google engineer with a Ph.D. in mathematics, wrote in a 2015 blog post bidding farewell to Fulltouch.

So renowned is the chalk among mathematics professionals that it is accompanied by its own legend: It is impossible to write a false theorem with it, David Eisenbud, director of the Mathematical Sciences Research Institute in Oakland, California, said in the video.

When the news broke that Fulltouch's maker was ceasing production and closing its doors, it launched a "chalkapocalypse" among mathematicians, said Brian Conrad, a professor at Stanford University in California. In the video, Conrad and others recounted their responses to the chalk emergency, stocking up on enough to carry them through as much as 15 years in a chalk desert.

However, there is a ray of hope for those who didn't have the foresight to fill their closets and cupboards with Fulltouch when they had the chance. Hagoromo sold the Fulltouch recipe — and two of the factory's original chalk-making machines — to the Korean company Sejongmall. The chalk is being manufactured again under its original name, and is available to buy in the U.S. on Amazon.