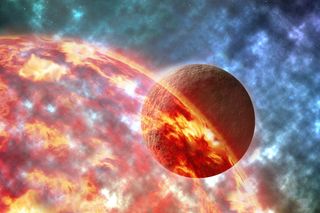 A new study suggests that the moon formed after a giant protoplanet crashed into Earth, which was then covered in a magma ocean. The resulting magma splash formed a disc around the planet that eventually coalesced into the moon, according to the study.
(Image: © Shutterstock)

There is a problem with the moon: Nobody really knows how it formed, and the most popular theory — known as the giant impact hypothesis — doesn't seem to match up with modern observations of the moon's chemical composition.

In a new study published April 29 in the journal Nature Geoscience, a team of researchers from Japan and the United States attempt to resolve this lunar paradox by adding an ocean of magma to the mix.

The new study begins with the standard version of the giant impact hypothesis, which goes something like this: Once upon a time, about 4.5 billion years ago, when the solar system was still full of baby planets, a renegade rock roughly the size of Mars took a wrong turn near Venus and smashed head-on into the still-forming Earth. The shattered remains of this foreign planetoid, along with some chunks of broken matter that splintered off Earth, coalesced in orbit around our planet and eventually became the round, pock-marked moon we know and love, the theory goes. [10 Interesting Places in the Solar System We'd Like to Visit]

Computer simulations of this ancient impact suggest that, if this was indeed how the moon came to be, most of the material that makes up the moon would have to have come from the planetoid that crashed into Earth. But recent studies of moon rocks tell a different story. More and more, researchers are finding that the chemical composition of Earth and the moon are nearly identical. How, then, can the moon be made of mostly Earth and mostly not-Earth at the same time? Something's gotta give.

The authors of the new study attempt to resolve this paradox by setting the time of the great impact at about 50 million years after the formation of the sun (toward the earlier end of the typically estimated window) when the young Earth may have been covered by a sea of magma up to 930 miles (1,500 kilometers) deep. In a series of computer simulations, the researchers pitched a rocky protoplanet into this magma-drenched Earth, and then watched as the molten sea splashed up into space in a giant "arm" of magma.

The impacted magma reached significantly higher temperatures than the rocky material of the planetoid, causing the magma splash to expand in volume as it sprang into space. At first, the researchers wrote, the magma splash followed the broken bits of the proto-planet around Earth’s orbit, but quickly overtook them. While most of the protoplanet impactor eventually fell back into Earth's hot ocean, the vast cloud of molten material remained in orbit and eventually coalesced into a moon. These simulations resulted in a moon with a much higher percentage of Earth-derived material than previous studies have found.

According to the study authors, the magma-ocean hypothesis shows that the moon's Earth-like chemical composition could be compatible with the giant impact theory. It's still not a complete answer to how the moon formed, but it does unify the predominant theory with actual observations a little more neatly.