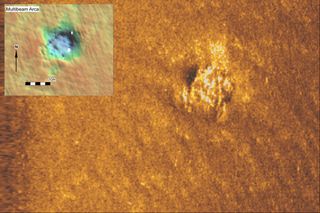 A sonar anomaly in the North Sea ended up being a 16th-century Dutch shipwreck.
(Image: © Netherlands Cultural Heritage Agency)

Salvagers looking for steel shipping containers at the bottom of the North Sea have discovered a 500-year-old Dutch shipwreck holding a cargo of tons of copper.

The searchers were using ship-borne sonar to find steel containers that fell from the ship MSC Zoe during a storm in January, when they spotted something on the seafloor north of the Dutch island of Terschelling.

Thinking the sonar anomaly might be a sunken shipping container, they sent down a mechanical grab — and brought up instead some timbers from the 16th-century shipwreck, and almost five tons (4,700 kilograms) of its precious cargo of copper plates. [Mayday! 17 Mysterious Shipwrecks You Can See on Google Earth]

Martijn Manders, who heads the international maritime archaeology program for the Cultural Heritage Agency of the Netherlands, told Live Science that the shipwreck could be the oldest yet found in the Dutch waters of the North Sea.

The recovered timbers showed the 100-foot-long (30 meters) ship was built in the 1540s, around the time that the medieval Dutch method of building ships' hulls with overlapping planks, known as "clinker," was being replaced with the more advanced "carvel" style of flat planks nailed to a wooden frame.

The carvel style, learned from the Mediterranean, was needed to make bigger ships with hulls that leaked less easily in heavy waves, and would be used in later centuries by large Dutch ships sailing and trading around the world.

The newly discovered shipwreck could be a "missing link" in Dutch shipbuilding, Manders said. The timbers show that it was built by using a temporary framework of small outer planks, which were an intermediate step between traditional shipbuilding techniques and the new carvel style.

Archaeologists think that the ship was journeying from the Baltic Sea and was bound for Antwerp (now in Belgium, but in the early 1500s was in the Netherlands) when it sank. The cargo of copper on board could represent one of the earliest uses of copper for coins in Europe.

Stamps on the copper plates showed they that had been produced by the wealthy Fugger family of Germany, Manders said, adding that chemical tests on the metal showed it was identical to the first copper coins used in the Netherlands.

Cities in the Netherlands were early adopters of copper coins in the 16th century, when the currency was first introduced as an affordable alternative to payments in gold and silver coins and by barter, he said.

The shipwreck, therefore, represents three key developments in Dutch history: a pivotal change in shipbuilding techniques, the growth of the Dutch economy after the 1500s, and the introduction of copper coinage. "So we have three things that make this such an exceptional ship, without having dived on the ship yet," Manders said.

The timbers brought up by the salvage grab from the seafloor showed no evidence of infestation with shipworm and were in remarkably good condition, he said. Maritime archaeologists hope to make their first dives to the wreck this summer. Until then, the shipwreck site is being watched by the Dutch coast guard.