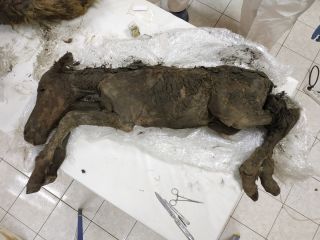 Called the Lena horse (Equus caballus lenensis), this ice age foal was found in the Batagaika Crater in eastern Siberia and is thought to have been just 2 months old when it died, likely by drowning in mud.
(Image: © courtesy Semyon Grigoriev)

This is the second time that a defrosted Ice Age animal has turned out to contain liquid blood, said Semyon Grigoriev, the head of the Mammoth Museum at North-Eastern Federal University in Yakutsk. In 2018, Grigoriev and his colleagues extracted liquid blood from a 32,200-year-old mammoth carcass. That makes the foal's blood the oldest ever found by 10,000 years.

Grigoriev and his colleagues are set on cloning a mammoth and other Pleistocene fauna, and they're already trying to clone the foal, a member of an extinct species called the Lena horse. It's a long shot, though, Grigoriev wrote in an email to Live Science. [Photos: Perfectly Preserved Baby Horse Unearthed in Siberian Permafrost]

The Lena horse (Equus caballus lenensis) foal was found in the Batagaika Crater in eastern Siberia last year. The foal was 1 to 2 weeks old and stood 39 inches (98 centimeters) at the shoulder when it died, drowning in mud. Remarkably, the icy permafrost preserved the foal's skin and hair down to the tiniest detail. There was even well-preserved urine still inside the foal's bladder, Grigoriev said.

The liquid blood was a surprise, he said. Typically, blood coagulates or turns to powder even in well-preserved carcasses, because fluids gradually evaporate over thousands of years, he said. In the mammoth, dubbed "Buttercup" by researchers, the blood was preserved in ice inside the carcass. [Photos: Autopsy of a 40,000-Year-Old Mammoth Named 'Buttercup']

The foal autopsy should reveal a lot about Pleistocene Siberia, Grigoriev said. Not only will researchers study the biochemistry of preserved urine, gut contents and organs, but they will also study samples of the soils and paleo plants found in the layer of permafrost where the foal died.

The blood may not help the researchers reach their goal of reviving an ice age animal. Red blood cells don't have nuclei, so they don't contain DNA, Grigoriev said.

For cloning, the researchers are focusing on muscle cells and internal organs, he said. Even there, finding DNA in good enough condition for cloning is a big challenge. DNA starts to degrade soon after an animal's death, even in excellent preservation conditions such as permafrost, Grigoriev said.

The team has been trying to extract intact cells and quality DNA from the foal for two months, Grigoriev said, without success. The researchers will continue to try both in Yakutsk and at the laboratory of their collaborator Hwang Woo-suk, the CEO of Sooam Biotech in South Korea, he said. Hwang was found guilty of embezzlement and bioethical violations in 2009 after a set of human stem-cell cloning experiments published in the journal Science in 2004 and 2005 turned out to be faked. He then kept a low profile for several years before making headlines for cloning dogs for wealthy clients. According to Vanity Fair, his company has cloned more than 1,000 dogs. He has also been working with Grigoriev and his team on attempts to clone a mammoth.

Grigoriev and his colleagues hope that if they can retrieve viable DNA from a mammoth, they can insert the DNA into an elephant embryo cleared of its genetic information, implant the embryo into an elephant and resurrect the woolly mammoth. A similar process could work for the Lena horse, using modern horses as surrogates. A recent documentary on these efforts, "Genesis 2.0," won a prize for cinematography at the Sundance Film Festival in 2018.

Editor's Note: This story has been updated to correct the age of the foal. It was 1 to 2 weeks old, not 2 months, when it died.