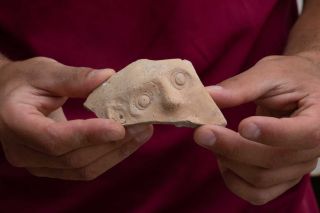 Archaeologists recently found a piece of pottery decorated with the funny face of an ancient deity who is often depicted as a bearded dwarf with a big face and bug eyes.

This deity, known as Bes, is often portrayed as a silly guy — usually with his tongue sticking out and a feathered hat adorning his head. On this particular pottery shard, however, it's unclear exactly what the deity is doing with his tongue, which broke off long ago.

Archaeologists found the deity's clay face in the Givati ​​Parking Lot excavation, the largest active archaeological excavation in Jerusalem at the moment. In particular, they uncovered the face in a large trash pit, which held dozens of other pottery fragments dated to the Persian period, when ancient Persians ruled the Middle East from about the fourth to the fifth century B.C., according to archaeologists from the Israel Antiquities Authority (IAA) and Tel Aviv University. [Photos: Ancient Egyptian Statues of Deities Found in Pit]

Bes' clay face is broken, but it's still possible to see two wide-open eyes, a nose, one ear and part of a mouth.

"This is the first time that such a vessel has been found in archaeological excavations in Jerusalem or anywhere in the Judean highlands," Yuval Gadot, a professor of archaeology at Tel Aviv University and Yiftah Shalev, an IAA archaeologist, said in a statement.

The clay face was likely once part of a jug known as a Bes-vessel, which was popular during the Persian period. According to Egyptian mythology, Bes was the protector deity of households, particularly of mothers, women in childbirth and children. "Over time, he became regarded as the defender of everything good," the IAA wrote in the statement.

Bes was also viewed as a deity of music and dancing. Archaeologists have found his dwarf-like figure decorating walls in houses, pottery vessels and mirrors. He even appeared in amulets that people wore around their necks. Apparently, his pudgy appearance was meant to evoke joy and laughter and drive away evil spirits.

Bes ranged far and wide. His figure also appears in many Persian period settlements along the coast of the Mediterranean in what is now Syria, Lebanon and northern Israel, where the Phoenicians lived, as well as in cities in ancient Persia (now called Iran), such as Shushān and Persepolis. His likeness was likely a boon to the Egyptian economy, as Egyptian crafters would sculpt Bes and then send him off to take part in the international trade economy of the ancient world.