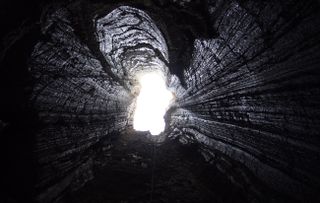 An Israeli-led research team believes that Malham Cave in the Negev Desert is the longest salt cave in the world, measuring more than 6 miles (10 kilometers) in total length.

"Salt cave" is a literal term here: Malham sits under Mount Sedom, just southwest of the salty Dead Sea, and its walls are made out of the same sort of salt on your kitchen table. Radiocarbon dating suggests it's about 7,000 years old, its many passages carved by the very occasional rain storms that pass through the region. Even now, Malham continues to grow when water flows in and dissolves more of the salt, according to a statement.

A team of 80 cavers from nine countries explored the cave's many crevasses using laser measurement tools. The full map and results of their explorations haven't yet been published. But, in the statement, the team compared the total length (the result of adding up the lengths of all the different splintering passages) with the now former record-holder. [Image Gallery: Rainbow of Life in Great Salt Lake]

Achieving that measurement was hard work.

Cavers are still exploring some of the hardest-to-reach places of the cave system, he said, suggesting a bit more distance might be added to the total length.

Mount Sedom sits near the Dead Sea, a shrinking salt lake (and lowest point on Earth) that extends into Jordan, Israel and the occupied West Bank. The mountain sits outside the West Bank, and according to the statement was discovered in the 1980s.