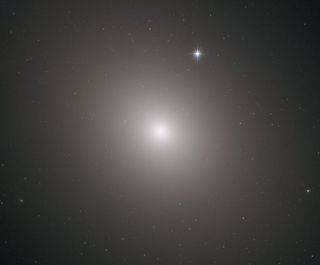 The Hubble Space Telescope captured this image of a galaxy called Messier 49, which contains about 200 billion stars.
(Image: © ESA)

Two incredible new images from the Hubble Space Telescope show galaxies in all their shining glory.

The first photograph, of a galaxy called Messier 49, includes some 200 billion stars, although there's no way to pick out most of the individual pinpricks of light within the image.

Most of the stars within this elliptical galaxy are about 6 billion years old, and those within its 6,000-odd globular star clusters are even older. And then there's the supermassive black hole at the heart of Messier 49, which contains the mass of 500 million suns. It's all quite a lot to fit in just one image, even an image of an object 56 million light-years away.

Both this galaxy and that shown in the second new image, Messier 28, were first categorized by astronomer Charles Messier, although he wasn't always sure what he was seeing. That's because he didn't have the benefit of Hubble's view from beyond Earth's atmosphere, which produces much sharper photographs.

Sharp like this picture of the stunning globular star cluster, Messier 28, which looks like a smear of light near the constellation Sagittarius when viewed from Earth. Messier 28 is also much closer than Messier 49 is, at just 18,000 light-years away from Earth. So, unburdened by atmospheric interference, Hubble can pick out Messier 28's individual stars in stunning detail.