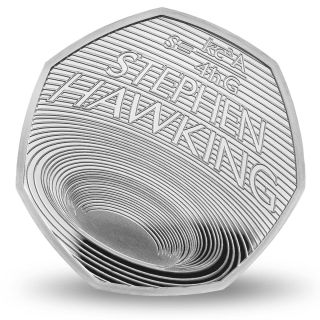 The Royal Mint of the United Kingdom has released a commemorative coin honoring the late physicist Stephen Hawking, and featuring one of his favorite subjects — black holes.

The new 50-pence (66 cents) coin features Hawking's name spread over a field of concentric, circular lines representing a black hole. Cleverly, the surface of the coin appears to indent inward at the black hole's center (but is actually a 2D image).

Also featured on the coin is one of Hawking's signature theorems: S=(k*A*c^3)/(4*hbar*G), otherwise known as the Bekenstein–Hawking equation. (In this equation, S is entropy, k is the Boltzmann constant, A is the surface area of the black hole, c is the speed of light, hbar is Planck's constant and G is Newton's gravitational constant). Hawking and fellow physicist Jacob Bekenstein developed this equation to describe how the entropy of black holes — essentially, their internal randomness and disorder — relates to the surface area of the black hole's event horizon. As an object falls into a black hole, its entropy increases. [Stephen Hawking: A Physics Icon Remembered in Photos]

This equation helped lead Hawking to one of his most celebrated discoveries: the idea that, even as black holes vacuum up massive amounts of matter, they also slowly radiate tiny particles back into space — a phenomenon now known as Hawking radiation.

The new Hawking coin won't suck you into an inescapable singularity, but hopefully it will look pretty spiffy on your shelf. You can order one from the Royal Mint's website for 10 pounds (about $13) plus shipping. (Coins will ship in late April, the site says.)

If that seems like a supermassive sum for a 50-pence coin, consider that this bit of decorative science art is for commemorative use only and will never "appear in your change," according to the Mint. Meanwhile, Hawking is also a candidate to appear on the Bank of England's new 50-pound bill, which will feature the face of a famous English scientist. That scientist's identity will be announced later this year.