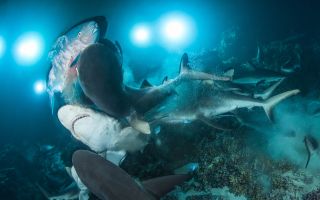 In the darkened depths of French Polynesian waters, a panicked parrotfish shot through clumps of coral on the seafloor, frantically seeking shelter from the dozens of hungry sharks pursuing it.

But a reef shark's jaws soon clamped down on the fleeing fish — and a photographer was there to capture the moment, winning accolades in an international photo competition.

For Barnden, snapping his standout photo was an unexpectedly harrowing experience, he said in the statement.

About 700 sharks typically patrol the channel mouth at Fakarava South Pass in French Polynesia where the photo was taken, and they begin to hunt when night falls, Barnden said. As he descended into the depths and saw hundreds of sharks massed along the ocean bottom, he felt his heartbeat speed up — that was the moment he spotted the parrotfish "running the gauntlet" of attacking predators, he said.

"In desperation, it hurtled straight towards me as I snapped a few passing shots," Barnden recalled. When the frenzied sharks careened after their prey, Barnden curled up into a protective ball; moments later, nothing remained "but a few falling parrotfish scales," he said.

The annual Underwater Photographer of the Year (UPY) contest draws submissions from around the world in 13 categories. Some of this year's prizewinning images include colorful mollusks; eerie shipwrecks; a tiny octopus hitchhiking on a jellyfish; and a rarely seen gathering of sperm whales.

But while many of these photos showcase the beauty of undersea life, a new category for marine-conservation images presented more sobering views of marine creatures.

An arresting image of a loggerhead sea turtle tangled in a plastic fishing net near the Canary Islands earned Spanish photographer Eduardo Acevedo the title of Marine Conservation Photographer of the Year 2019 and sent a powerful message about the impacts of human activity and pollution on ocean habitats, UPY judge Alex Mustard, a marine biologist and underwater photographer, said in a statement.

Luckily for the turtle, Acevedo freed it from the net after capturing the photo, according to UPY.