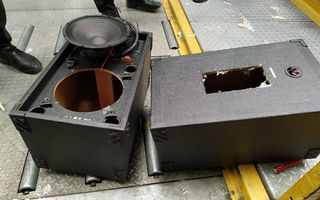 An X-ray scanner detected the mummy parts inside a pair of speakers.
(Image: © Egyptian Ministry of Antiquities)

The recovered remains — a torso portion, an arm, part of a left hand, two legs and two feet — came from two mummies and were concealed inside a pair of stereo speakers, according to the ministry. [Reclaimed History: 9 Repatriated Egyptian Antiquities]

After airport officials discovered and confiscated the hidden body parts, archaeologists examined the remains and confirmed that they came from ancient mummies. The mummy parts were then brought to the Museum of Antiquities in Cairo for restoration, the ministry reported.

All antiquities that originate in Egypt are considered to be the property of the state, according to the Egyptian Law on the Protection of Antiquities, enacted in 1983. With some exceptions, the law prohibits private ownership of objects that have historical or archaeological value — including human and animal remains.

Trade in Egyptian antiquities is strictly forbidden, and the removal of objects from the country without the express permission of antiquities authorities carries a fine and a prison sentence of up to two years. To enforce this law, a special archaeological unit — the team that identified the recently-discovered mummy parts — operates at the Cairo airport, the ministry reported.

Despite these precautions, trafficking in stolen artifacts persists. In 2016, objects worth an estimated $50 million were illegally shipped from Egypt to the U.S. This represents the highest annual value of trafficked Egyptian artifacts in 20 years, Live Science previously reported.

In fact, looting of archaeological sites in Egypt has escalated dramatically since 2011, when political upheaval and economic instability rocked the country, experts reported in 2016 in the journal Antiquity.

Examination of satellite imagery of more than 1,000 sites across Egypt dating from 2002 to 2013 showed that looting affected many locations. Researchers found that incidents of looting doubled between 2009 and 2010, the years leading up to the 2011 unrest, and then doubled yet again between 2011 and 2013, according to the 2016 Antiquity study.