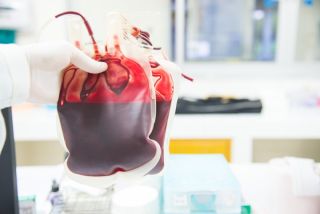 If you think the idea of getting a transfusion with "young blood" to ward off aging sounds far-fetched, well, U.S. health officials agree.

Today (Feb. 19), the U.S. Food and Drug Administration (FDA) said it was concerned about reports of "bad actors" offering infusions of blood plasma from young people to purportedly treat age-related conditions and diseases, such a memory loss, Parkinson's and Alzheimer's disease. Such treatments are not only unproven, but they also come with potentially serious risks, the agency said.

"Simply put, we're concerned that some patients are being preyed upon by unscrupulous actors touting treatments of plasma from young donors as cures and remedies," Dr. Scott Gottlieb, the FDA commissioner, and Dr. Peter Marks, director of the FDA's Center for Biologics Evaluation and Research, said in a statement. "Such treatments have no proven clinical benefits for the uses for which these clinics are advertising them and are potentially harmful."

Plasma is the liquid portion of blood and does not contain blood cells. Transfusions with plasma can be lifesaving for people who experience physical trauma or who have certain diseases or conditions that prevent their blood from clotting properly.

But the FDA has not approved plasma transfusions for the treatment of age-related conditions and diseases, and these treatments are not known to be safe or effective.

"We strongly discourage consumers from pursuing this therapy outside of clinical trials" that have received appropriate review and regulatory oversight, Gottlieb and Marks said.

What's more, some reports indicate that these unapproved transfusions may involve large volumes of plasma, and such large doses are linked with "significant risks," such as infections, allergic reactions, and breathing and cardiovascular problems, the statement said.

The FDA urged consumers to consult their doctors before considering such treatments. In addition, clinical trials that are testing blood transfusions for purposes not yet approved by the FDA must have an "investigational new drug (IND) application" with the FDA, which means that the agency has reviewed the experimental therapy to make sure it is safe. So if the blood transfusion therapy is said to be offered as part of a clinical trial, people should ask to see the IND number and a copy of the FDA's communication acknowledging the application, the agency said.