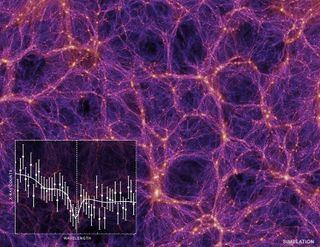 An artist's depiction of the filaments of gas that fill intergalactic space, with an inset chart of how those filaments interact with X-rays from a quasar.
(Image: © Copyright Illustration: Springel et al. (2005); Spectrum: NASA/CXC/CfA/Kovács et al.)

Astronomers think they've found a new clue in their continuing quest to solve one of the most substantial mysteries of the cosmos: where about a third of the universe's matter is hiding.

That missing matter isn't dark matter (a whole different head-scratcher), it's perfectly normal, run-of-the-mill matter that scientists simply can't find. And that makes it a massive cosmic annoyance for astronomers. But a team of researchers may have figured out a clue that will help them track down this missing matter, thanks to the NASA's Chandra X-ray Observatory.

"If we find this missing mass, we can solve one of the biggest conundrums in astrophysics," lead author Orsolya Kovács, a doctoral student at the Harvard Smithsonian Center for Astrophysics, said in a NASA statement. "Where did the universe stash so much of its matter that makes up stuff like stars and planets and us?" [Our X-Ray Universe: Amazing Photos by NASA's Chandra X-Ray Observatory]

Kovács and her research colleagues wanted to explore one popular theory: that the missing matter is hidden in the stringy filaments of warm gas that fill intergalactic space. Those filaments are typically hard to study, since telescopes tuned to the same light our eyes can see can't register these structures.

So the researchers came up with a work-around. They turned to Chandra's observations of a quasar called H1821+643, which produces a strong X-ray signal, figuring that if all that missing matter really is hiding in the intergalactic filaments, it would tweak the quasar's signal. Then they could work backward, comparing what they expected to what they saw.

They also tailored their search, homing in on specific wavelengths of X-ray light that they had determined would best show the effects of the filaments given the particular quasar they observed. That meant they could actually use the quasar's X-rays as a tool rather than simply being overwhelmed by its extremely bright emissions.

"Our technique is similar in principle to how you might conduct an efficient search for animals in the vast plains of Africa," Akos Bogdan, a co-author on the new research and an astrophysicist at the Harvard Smithsonian Center for Astrophysics, said in the same statement. "We know that animals need to drink, so it makes sense to search around watering holes first."

All told, the team identified 17 different filaments using this targeted approach. And the researchers used their observations to calculate how much mass was actually hiding in these filaments. Those calculations suggest that in this patch of the universe, at any rate, the missing mass is indeed hiding within these filament structures.

The research is described in a paper published Feb. 13 in The Astrophysical Journal.