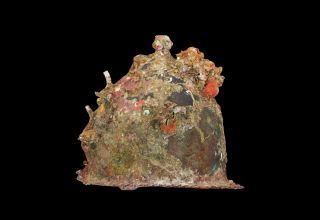 Archaeologists have found many helmets during the survey of the Rome-Carthage battle site. Here, a 3D model of one of of those helmets, created by William M. Murray.
(Image: © Courtesy of RPM Nautical Foundation)

Archaeologists exploring the site of a naval battle fought 2,200 years ago between Rome and Carthage have uncovered clues to how the battle may have unfolded — as well as several mysteries.

The finds suggest that Carthage reused captured Roman warships during the battle and that Carthaginian sailors may have thrown cargo overboard in a desperate attempt to help their ships escape the Romans.

According to historical records, the naval battle occurred on March 10, 241 B.C., near the Aegates Islands, not far from Sicily in the Mediterranean Sea. In the battle, a Carthaginian fleet that had been trying to bring supplies to one of Carthage's armies in Sicily was intercepted by the Roman navy, which proceeded to destroy much of the fleet. The victory was so resounding that Carthage was forced to sue for peace, agreeing to terms that favored Rome. [10 Epic Battles that Changed History]

Carthage seems to have fought the battle with a fleet that partly consisted of captured Roman ships. "Of the 19 securely known rams from this area, I believe 11 of them are securely identified as Roman rams," said team member William Murray, a professor of Greek history at the University of South Florida. Additionally, the type of design on many of the helmets found at the site is one that archaeologists call "Montefortino." The helmet design was so popular with the Romans that they decorated some of their rams with images of the helmets.

The discovery of numerous Roman rams and Montefortino-type helmets leaves archaeologists with a dilemma. "You would expect that the Carthaginians, who lost the battle, would have suffered the most casualties," said Murray, noting that you would also "expect that most of the warship rams would belong to Carthaginian-manned warships."

Carthage likely used ships that they had captured from the Romans in a previous naval battle, said Murray, who added that historical records say that in one battle, which occurred several years before the Aegates Islands battle, Carthage captured 93 Roman ships. [What Was the Most Pointless Battle in History?]

Why there are so many Montefortino helmets is a bit of a mystery. One explanation is that the Carthaginians hired mercenaries from Gaul and Iberia and used them to crew many of their ships in the fleet, Murray said. Soldiers in those areas sometimes used Montefortino helmets.

They also found several amphorae — a type of pot often used to store liquids — scattered around the remains of the Roman ships. This is odd, since any pots that went down while being stored within a ship should have been clustered together, Murray said.

"It's as if they were jettisoned out into the sea, and they separated one from another and then sank to the seafloor," Murray said. One possible explanation is that, at some point in the battle, Carthaginian sailors realized that their mission was not going to succeed and jettisoned the cargo (supplies meant for the Carthaginian army in Sicily) in an attempt to make their ships lighter and faster, making it easier for them to flee from the Roman fleet, Murray said.

In addition to being widely dispersed, "none of the amphora are lined with a tar-like substance" that prevents liquid from evaporating while it is being stored, Murray said. This means that any liquids inside would have partly evaporated by the time the pots had reached Sicily. Consequently, even if the Carthaginian fleet had reached Sicily, part of the cargo would have gone to waste. While amphorae could also be used to store grain, ancient depictions of cargo being taken off ships indicate that grain was more commonly put into sacks, he said.

Perhaps the Carthaginians were so desperate to bring supplies to their army that they didn't have time to line the amphorae, Murray said. Another possibility, he said, is that the Carthaginians didn't have any sacks available and decided to use amphorae instead to bring dry goods to Sicily. Scientists are in the process of performing chemical tests to try to determine what the containers held, according to Murray.

Murray and other members of the team presented their findings in a paper presented at the joint annual meeting of the Archaeological Institute of America and the Society for Classical Studies held in San Diego between Jan. 3 and 6. The project to survey and excavate the underwater site is being conducted jointly by the Sicilian Soprintendenza del Mare and RPM Nautical Foundation and involves scientists from several other institutions. Another field season is being planned for 2019.