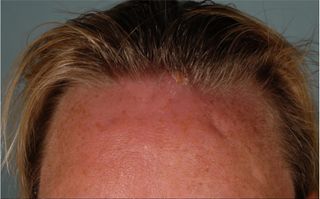 The fly larva "punctum," or opening, is visible at the woman's hairline. The surrounding area is red and swollen.
(Image: © BMJ Case Reports 2019)

When a British woman returned from a visit to Uganda, she didn't realize that a live baby fly had hitched a ride home with her.

In fact, it wasn't until about nine days later that the 55-year-old woman noticed anything unusual at all, when a swollen lump developed on her forehead, according to a recent report of her case.

The woman went to the emergency room, where doctors diagnosed the lump as an infected insect bite and sent her home with antibiotics to treat it, the report said. [27 Oddest Medical Case Reports]

But three days later, the woman returned to the emergency room because her symptoms had worsened: The swelling on her forehead now extended to include more of her face and eyelids, and she experienced sharp, shooting pains in the area.

A closer exam of the lump revealed a small opening in its center, with some watery discharge coming out. As a precaution, the doctors admitted the woman to the hospital for more tests because they suspected her skin problem might be tied to her recent travels and could be a condition not commonly seen in England.

These hunches proved correct: The small opening in the skin was actually a breathing hole for a baby fly, or maggot, said lead case report author Dr. Farah Shahi, an infectious-disease specialist at York Teaching Hospital in the U.K., who was involved in the woman's treatment.

To remove the maggot, doctors started by applying petroleum jelly to the opening, which is also called a "punctum." This blocks the insect's source of air, coaxing it to move closer to the surface of the skin so it's easier to remove.

Then, they were able to successfully remove the live maggot from the woman's forehead. The fly was identified as a Lund's fly (Cordylobia rodhaini), a species native to the African rainforests that rarely infests people, according to the case report.

So, how did the fly wind up there? The woman likely came in contact with the insect when she wrapped her hair in a damp towel that had maggots on it, Shahi told Live Science. The towel had been hanging on an outdoor clothing line, and a fly could've laid its eggs on the towel, which hatched into maggots.

The forehead is considered an unusual site for a maggot to infest human skin, and there has been only one previous case in the U.K. of such an infestation, according to the report. Rather, skin infestations from the Lund's fly are more commonly found on the chest, back, stomach and thighs.

After four days in the hospital, the woman was sent home and her wound fully healed. She also found out that another person who traveled with her to Uganda had developed the same maggot infestation on his back when he returned home.

The case report was published online (Jan. 22) in the journal BMJ Case Reports.