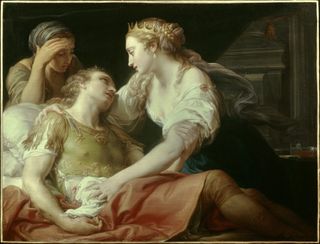 Over the past two weeks, numerous media reports have claimed that a team led by archaeologist Zahi Hawass is on the verge of discovering the tomb of Mark Antony and Cleopatra VII at a site in Egypt called "Taposiris Magna."

But alas, the "pair so famous" has yet to be discovered. Hawass, Egypt's former minister of antiquities, told Live Science that the news reports are false.

"This is completely false information; [there is] nothing found at all about the tomb," Hawass told Live Science. [The 6 Most Tragic Love Stories in History]

Many of the media reports claim that during a recent lecture in Palermo, Italy, Hawass said that the tomb was about to be found. At that lecture, Hawass told Live Science, he discussed work at Taposiris Magna, which is being carried out by a team led by Kathleen Martinez, an archaeologist who believes that the tomb of Mark Antony and Cleopatra VII could be located at the site. While he discussed Martinez's idea, he never said that archaeologists are close to finding the tomb.

The team led by Martinez has been excavating at Taposiris Magna for about 10 years and has made many discoveries, including catacombs that date to the Ptolemaic period (305 B.C. to 30 B.C.), a time when a dynasty of kings who descended from one of Alexander the Great's generals ruled Egypt. After the death of Cleopatra VII in 30 B.C., Egypt became a Roman province.

Antony (lived 83 B.C. to 30 B.C.) and Cleopatra VII (lived 69 B.C. to 30 B.C.) are two of history's most ill-fated lovers. Antony was a Roman general who, for a time, formed an alliance with Octavian, the two jointly ruling over Rome's expanding empire. Antony spent much of his time in Egypt where he fell in love with Cleopatra, the couple having three children together.

After a falling out, Octavian and Antony went to war with each other in 32 B.C., with Antony's navy being crushed at the Battle of Actium fought in 31 B.C. Octavian's forces then landed in Egypt, and Antony and Cleopatra committed suicide in Alexandria in 30 B.C.

The ancient historians Suetonius (lived A.D. 69 to 122) and Plutarch (lived A.D. 46 to 120) both claimed that Antony and Cleopatra were buried together inside a tomb. Plutarch wrote that Octavian gave orders that Cleopatra's "body should be buried with that of Antony in splendid and regal fashion" (translation by Bernadotte Perrin).

While Suetonius wrote that Octavian "allowed them both the honour of burial, and in the same tomb, giving orders that the mausoleum which they had begun should be finished" (translation by J. C. Rolfe). This tomb has never been found.