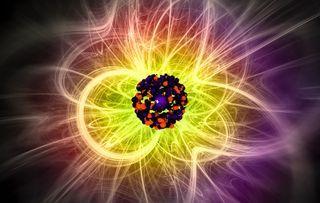 Researchers have created what may be the tiniest droplets of fluid in the universe, in a primordial soup that's trillions of degrees and swishes around at nearly the speed of light.
(Image: © Shutterstock)

By smashing particles together, physicists may have created the smallest droplet of fluid in the universe — a proton-sized bead of hot, primordial soup.

This particle soup is quark-gluon plasma, the fluid that filled the cosmos during the first microseconds after the Big Bang. It's at trillions of degrees, and with hardly any friction, it swishes around at near the speed of light.

"It's the most extreme fluid that we know of," said Jacquelyn Noronha-Hostler, a theoretical physicist at Rutgers University in New Jersey. [5 Elusive Particles Beyond the Higgs]

Physicists have collided particles to create this primordial soup before, and some experiments have suggested that certain collisions produce droplets as small as protons. In a new paper published Dec. 10 in the journal Nature Physics, physicists from the Pioneering High Energy Nuclear Interaction Experiment (PHENIX) reported what may be the most convincing evidence yet that such droplets can be so tiny.

"It's really getting us to rethink our understanding of the interactions and conditions of this kind of droplet flow," said Jamie Nagle, a physicist at the University of Colorado Boulder who analyzed data in the most recent experiments. The results could help physicists better understand the quark-gluon plasma of the early universe and the nature of fluids.

"It means we have to rewrite our knowledge of what it means to be a fluid," Noronha-Hostler, who wasn't part of the new experiments, told Live Science.

The experiments were done at the Relativistic Heavy Ion Collider (RHIC) at Brookhaven National Laboratory in New York, where physicists created the first quark-gluon plasma in 2005 by slamming atomic nuclei together. The quark is the fundamental particle that makes up protons and neutrons, which in turn make up atomic nuclei. Gluons are the force-carrying particles that hold quarks together in a proton or neutron via the strong force, one of the fundamental forces of nature.

Physicists previously assumed droplets of quark-gluon plasma had to be relatively large, Noronha-Hostler said. For a droplet to flow like a fluid, the thinking went, the object had to be a lot bigger than its constituent particles. A typical drop of water, for example, is much bigger than its own water molecules. On the other hand, a tiny clump of, say, three or four individual water molecules wouldn't behave like a liquid, researchers thought.

So, to make droplets of quark-gluon plasma as big as possible, physicists at the RHIC slammed together large atomic nuclei such as gold, which produce droplets of similar size — about 10 times bigger than a proton. But the physicists found that when they collided smaller particles, they unexpectedly detected hints of proton-size fluid droplets — for example, in collisions between protons done at the Large Hadron Collider near Geneva.

To find out whether these tiny droplets could in fact exist, physicists running the PHENIX detector at the RHIC fired protons; deuteron nuclei, which each contain a proton and a neutron; and helium-3 nuclei at gold nuclei. If these collisions formed fluid droplets of quark-gluon plasma, the scientists reasoned, the droplets would have different shapes depending on what the gold nuclei hit. Hitting a proton would create a round droplet; a deuteron would produce an elliptical droplet, and helium-3 would make a triangular droplet.

Such a droplet would live for only 100 billion billionths of a second before intense heat would cause the droplet to expand so rapidly that it exploded in a flurry of other particles.

By measuring this particle debris, the researchers reconstructed the original droplet. They looked for elliptical and triangular shapes in each of the three types of collisions, making six total measurements. The experiments took several years, and in the end, the researchers detected the telltale shapes, suggesting that the collisions did create proton-size droplets.

"With a full set of six measurements, it's hard for there to be a different explanation except for the droplet picture," Nagle told Live Science.

While the results are convincing, Noronha-Hostler said she isn't completely sure yet. Researchers still need better measurements of the jets that erupt from the particle collisions. If the tiny droplets of fluid did form, the impacts between the gold nuclei and the protons, deuterons, or heilum-3 should have produced high-speed particles that formed jets, which then would have blasted through the newly created quark-gluon droplets. As the jet whizzed through the fluid, it would have lost energy and slowed down, like a bullet traveling through water.

But so far, measurements show that the jets did not lose as much energy as predicted. Future experiments, such as the upgraded version of PHENIX that's scheduled to launch in 2023, should help physicists better understand what's going on — and determine for sure whether such tiny droplets can exist, Noronha-Hostler said.