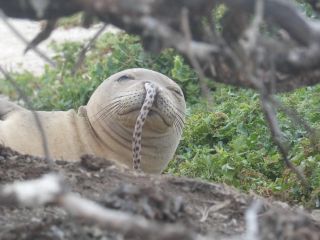 This Hawaiian monk seal got an eel stuck in its nose. Scientists say this is a rare, but not unheard of, occurrence.
(Image: © NOAA Fisheries/Brittany Dolan)

So, no one told you life was gonna be this way.

The Hawaiian Monk Seal Research Program released a photo on Monday of a poor Hawaiian monk seal, squinting in what can only be a what-is-my-life look, with a probably-also-distressed eel stuck up its nose.

This phenomenon, eels getting stuck in seals' noses, is rare; the team has observed only three or four cases of eel-nose in the past four decades, said Charles Littnan, a monk seal conservation biologist with the National Oceanic and Atmospheric Administration (NOAA) Fisheries. But weirdly, the incidence has been increasing in the past couple of years. "In almost 40 years of monitoring, we have actually never observed this until a few years ago," Littnan said. [Gallery: Seals of the World]

Oddly, it seems to always be in the right nostril, but "I don't really think that means anything," Littnan told Live Science. This whole situation could just be a "weird anomaly" or a "crazy statistical quirk, and we may never see it again," he added. "We have no idea why it's happening."

As to how the eel gets stuck, Littnan has several ideas. The monk seals feed on or near the bottom of the ocean, because they're "very efficient" and "don't like to chase things in the water," he said. So, they go for the food, like eels, whose strategy is to hide.

Monk seals nose around in coral reefs, root around in the sand, and flip over 50-lb. (22 kilograms) rocks to grab hiding octopuses, Littnan said. While the unfortunate, recently photographed seal was doing this, an eel could have, in a case of self-defense, "rammed itself into the nostril and maybe got stuck," Littnan said.

Or if the seal brought the eel out to the surface to eat the prey, the eel could have whipped around and got into the nose, Littnan said. Since this phenomenon has been observed only in juvenile seals, Littnan said it could also just be that the seals are inexperienced at hunting.

Or, just like in the YouTube videos where people sneeze and spit up long strands of pasta through their noses, the seal could have regurgitated an eel that it ate, with the eel coming out the wrong pipe, Littnan said.

In this case, a relatively small part of the eel is in the nose, which "leads me to thinking that the eel forced itself in while trying to escape," Littnan said. In some other cases, the researchers have seen, in which around 2 feet (0.6 meters) of the eel was stuck the seal's nose, the seals must have regurgitated the prey, Littnan said.

If that had been the case with this seal, the animal probably could have gotten rid of the eel on its own by shaking its head around. But the eel may have gotten deeper into the nose, preventing the seal from removing the invader. An eel in the nose may be bad, but a rotting eel in the nose would be even worse; bacteria from the rotting flesh could have infected the animal, Littnan said. Also, seals' nostrils close automatically when the animals go under water, and having an eel in there could have hindered that process, closing off an all-around great day for the seal with some water up the nose.

In every instance of eel-nose, including this one, the researchers have removed the eel successfully. The seals were all fine, but the eels did not make it, according to the scientists' post.

Hawaiian monk seals are among the most endangered seals on the planet, with only about 1,400 of them living in Hawaii. But recent years have shown "encouraging developments," according to NOAA Fisheries. The seals' numbers have increased, even though these little creatures always "find unique ways to get themselves into trouble," Littnan said.