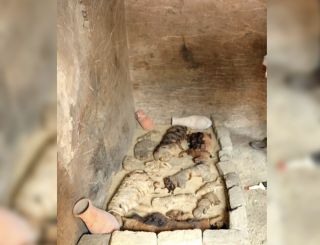 The remains of tens of cat mummies were discovered in the complex at Saqqara, Egypt.
(Image: © Photo courtesy Egyptian Ministry of Antiquities)

Ancient Egyptians seem to have been "cat people," or at least cat mummy people.

Researchers have dug up several mummified cats alongside about 100 wooden cat statues in a tomb complex near a pyramid built for the pharaoh Userkaf, who reigned from 2291 B.C. to 2289 B.C., the Egyptian Ministry of Antiquities announced Nov. 10.

The burials are located near the site of Saqqara in Egypt. Archaeologists are sorting out precisely when everything dates to, but it appears that sometime between 717 B.C. and 332 B.C., the complex was used for the burial of cats, the ministry said in a statement on Facebook. [See Photos of the Cat Mummies and Statues at Saqqara]

So far, tens of cat mummies have been found there, along with the wooden statues, which were gilded with gold and may date to the same time. A statue made of bronze showing Bastet, an Egyptian goddess who appears in the shape of a cat, was also discovered, the ministry said.

In ancient Egyptian mythology, Bastet had a multitude of powers. On one hand, she was a protective goddess who could fend off a variety of evil threats while, on the other hand, she was also a goddess associated with music, dancing and pleasure.

A vast number of other discoveries were made within or near the complex. These include statues depicting a lion, cow, falcon and crocodile, two mummified scarab beetles found within boxes and two mummified cobras that were found within cobra-shaped sarcophagi.

Papyri containing chapters from the "Book of the Dead" (a series of spells and instructions that help the deceased navigate the underworld) were also discovered. Additionally, archaeologists discovered the remains of human mummies, the remains of tombs meant for humans and several stone engravings. They also found the remains of baskets, ropes and jars made of clay, alabaster and bronze, the ministry said.

Excavations are ongoing, and it will be sometime before archaeologists can determine exactly when everything dates to and what the papyri and stone engravings say. Some of the engravings and tomb remains may date to the fifth or sixth dynasty (sometime between 2465 B.C. and 2150 B.C.), a time when pyramids were being built in Egypt, according to the statement.

A team from the ministry has been excavating the site since April and part of it was excavated between 2008 and 2013 by a French archaeological team said the statement.