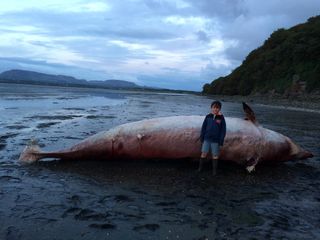 A total of 80 deep-water whales have been found dead on the Atlantic coasts of Scotland and Ireland since early August — more than 10 times the usual number over that time in previous years.

Marine mammal scientists say the presence of the washed-up whales suggests an "unusual mortality event," or UME, that could have killed up to 1,000 Cuvier'sbeaked whales in the North Atlantic Ocean in recent months.

The cause of the whale deaths is unknown, but scientists fear they may be the result of warships using active sonar to hunt for enemy submarines, or naval anti-submarine exercises. [The 22 Weirdest Military Weapons]

Simon Berrow, a marine biologist who heads the Irish Whale and Dolphin Group (IWDG), a conservation NGO, told LiveScience that 30 dead beaked whales had washed up on Ireland's west coast since Aug. 4.

Around 26 of the carcasses were Cuvier's beaked whales, a species that lives mainly in the deep ocean, while the rest were either Sowerby's beaked or northern bottlenose whales.

Typically, just two or three dead beaked whales would wash up on the Irish coast each year, Berrow said.

A similar increase in beaked-whale deaths has been reported along the west coast of Scotland.

Marine biologist Nicholas Davison, who heads the team of scientists that monitors marine mammal strandingsin Scotland, said a total of 50 dead beaked whales had been found on the western coasts of the Scottish mainland and islands between mid-August and early October.

"It is absolutely unprecedented," Davison told Live Science. "The average for a year is about two and a half, so you can see that we've got an exceptional event going on."

Berrow explained that a sharp increase in the evidence of whale deaths washing up on the coast implied that a much greater number of whales may have been killed in the open ocean.

Berrow came to his estimate of the Cuvier's whales that died in the latest mortality event (1,000) based on scientific studies of dolphin strandings in France, he wrote on the IWDG website. That's out of an estimated population of a few thousand of that species throughout the North Atlantic.

The carcasses, he said, were very badly decomposed by the time they washed up in Ireland and Scotland, suggesting that they had been dead and drifting for several weeks, he said.

Cuvier's beaked whales, also known as goose-beaked whales, are one of the deepest-diving whale species in the ocean: A study published online in 2014 in the journal PLOS ONE showed that they can dive to depths of more than 9,500 feet (2,900 meters) for more than 130 minutes, in search of the squid and deep-sea fish that they eat.

Scientific research has shown that Cuvier's beaked whales are sensitiveto the very loud sounds caused by anti-submarine sonar, which is used by warships hunting for enemy submarines and during naval anti-submarine exercises.

Scientists suspect theloud sonar sounds cause intense pain to beaked whales diving at extreme depths, so that they surface too quickly and die from decompression sickness. "The effect of navy sonar on beaked whales is fairly accepted, well-accepted, now," Berrow said.

After a scientific study of an earlier UME among deep-diving whales was published in 2010, "it came out later that NATO [forces] were looking for a Russian submarine… so maybe something like that happened here," he said.

Anti-submarine sonar isn't used by Irish warships, but it is used by the U.S. Navy and by Britain's Royal Navy, Berrow said.

"If the British or the Americans or NATO said there hadn't been a military exercise in the North Atlantic for years, then you'd be thinking it's probably not going to be that," Berrow said. "But of course, the navy doesn't tell you anything—it's top secret."

Both the Royal Navy and the U.S. Navy have studied reports that anti-sub sonar can affect diving whales.

In a statement to Live Science, a spokesman said Britain's Royal Navy "takes its responsibilities in safeguarding the environment very seriously."

When possible, Royal Navy sonar operators took "avoidance actions" when wildlife like whales were detected, using precautionary practices similar to those used in other marine industries, the statement said.

Berrow and Davison said the spate of whale deaths was now being investigated by conservation authorities in Ireland and the U.K.

Davison said the investigation could take a year or more to conclude and would include information from drift modeling of currents in the North Atlantic and the results of postmortem DNA studies on the dead whales, which might help researchers narrow down the location of the UME.