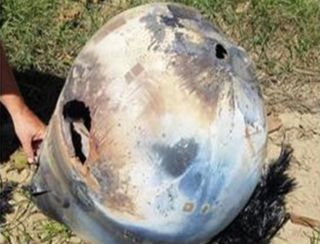 What would you do if you saw this thing in your walnut orchard?
(Image: © Kings County Sheriff's Office)

A walnut farmer in central California found a strange metal object in his orchard on Oct. 13.

He called the local sheriff's office, according to a KGET report. The sheriffs reached out to Vandenberg Air Force Base, and experts there reportedly said the burnt husk was likely a fuel tank from an Iridium communications satellite. Specifically, it came from Iridium 70, which according to the satellite tracking site n2yo.com fell out of its orbit three days earlier, on Oct. 10.

Iridium 70 was part of a constellation of communications satellites first launched in the late 1990s. This one, according to Astronautix.com, rode a Delta 7920-10C rocket into space on May 17, 1998 along with Iridiums 72, 73, 74 and 75. (Coincidentally, the launch site was Vandenberg Air Force Base.) Of those satellites, only Iridium 73 is still in orbit.

Iridium 70 hung in low-Earth orbit for 20 years, 4 months and 23 days; and for its operational lifetime, it supported satellite phone calls on the global Iridium network. According to KGET, this is the first piece recovered from an Iridium satellite after re-entry. As Live Science has previously reported, it's wildly unlikely that any given de-orbiting object will drop significant debris on land, let alone anywhere where the debris might be recognized.