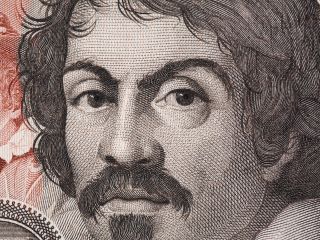 A portrait of the Renaissance painter Caravaggio on an Italian lire banknote.
(Image: © Shutterstock)

Instead, it appears that the talented Italian artist — who had a reputation for gambling, drinking, sleeping with prostitutes and even murder — died of a sword wound that developed a nasty infection, leading to deadly condition called sepsis, a new study finds. Sepsis is the body's overwhelming and life-threatening response to an infection.

A team of French and Italian scientists made the discovery by digging up and analyzing what they believe are the skeletal remains of the revolutionary painter, who died at age 39 in 1610. [Photos: Renaissance Husband's Heart Buried with Wife]

Caravaggio lived a life of drama before his mysterious death. Born in 1571 with the name Michelangelo Merisi in northern Italy, Caravaggio later changed his name to that of his hometown. After moving to Rome at 21, Caravaggio's talent was recognized by Cardinal Francesco del Monte, who helped the artist become an overnight sensation, according to The National Gallery in the United Kingdom.

Caravaggio's paintings made him a celebrity, but he was also known for his temper. "Caravaggio was arrested repeatedly for, among other things, slashing the cloak of an adversary, throwing a plate of artichokes at a waiter, scarring a guard and abusing the police," according to The National Gallery.

After killing a rival in a sword fight, Caravaggio ran from the law and tried to repair his reputation, but to no avail. After more brawls, the last in which he was gravely injured, he died while traveling back to Rome, and was buried in a cemetery in Porte Ercole, Tuscany, according to the study and The National Gallery.

Over the years, historians have speculated how the artist died. Caravaggio had a fever at the time his death, prompting some to guess that he had malaria or even brucellosis, an infection that people can get from eating unpasteurized dairy products.

To investigate, the researchers searched the cemetery reported to hold Caravaggio's remains. They looked for a skeleton that was about 5 feet, 4 inches (1.65 meters) tall and between 35 and 40 years of age.

Nine skeletons in the cemetery met these criteria, but only one dated to the beginning of the 17th century, according to radiocarbon dating, the researchers said. Even more revealing were the high levels of lead in the bones, "which was a discovery of great importance since Caravaggio was known to be careless when using lead for painting," the researchers wrote in the study, published online Sept. 17 in the journal The Lancet.

The research team also analyzed the individual's DNA and found that it matched the genetic profile of other men with the name Merisi or Merisio, who are believed to be Caravaggio's relatives.

"[The cause of death] resulted from sepsis secondary to superinfection of wounds after a fight in Naples, a few days before the onset of symptoms," they wrote in the study.