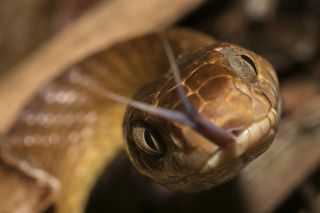 The brown tree snake is a stealthy, international traveler.

Invasive to Guam, the snake species, Boiga irregularis, first arrived on the Pacific island during World War II, most likely by hitchhiking on troop carriers from Australia, according to a statement.

Ever since, it has been devastating native bird populations in Guam and nearby islands. Since these snakes don't have natural predators to hunt them there, they were able to rapidly multiply, according to the U.S. Geological Survey (USGS).

Their venom, thought to be unique, contains two separate toxins that, together, make it 1,000 times more toxic to birds and reptiles than to mammals (their bite has only a minor effect on adult humans). [7 Shocking Snake Stories]

But in a new study, researchers investigated the venom of other snakes in the genus Boiga and found that they too had this double-toxin venom. So, any of these other species might have caused similar devastation on bird populations had they spread like the brown tree snake, the researchers reported on Sept. 12 in the Journal of Molecular Evolution.

Now, researchers are concerned that brown tree snakes and others will continue to spread to new habitats … by boarding flights.

"It's just that this particular species was transported to Guam by accident," senior author Bryan Fry, associate professor in the school of biological sciences at the University of Queensland, said in the statement.

The brown tree snake is native to Indonesia, the Solomon Islands, New Guinea and Australia, according to the USGS. And what made it easier for them to travel to new places, at least for the last 80 years or so, are planes, Fry said.

Editor's Note: This story was corrected to remove a quote from Fry saying that brown tree snakes are regularly intercepted in Hawaiian airports. The Hawaii Department of Agriculture (HDOA) told Live Science that the last brown tree snake found in Hawaii was in 1994 and that it is false to say they are found regularly. But "the threat is very real," HDOA said, and a security program is in place to prevent the transport of brown treesnakes to Hawaii.