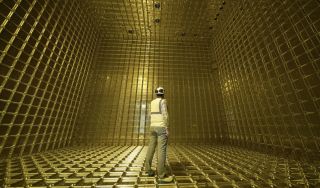 This ProtoDUNE detector was filled with 800 tons of liquid argon.
(Image: © CERN)

The study of the subatomic world has revolutionized our understanding of the laws of the universe and given humanity unprecedented insights into deep questions. Historically, these questions have been in the philosophical realm: How did the universe come into existence? Why is the universe the way it is? Why is there something, instead of nothing?

Well, move over philosophy, because science has made a crucial step in building the equipment that will help us answer questions like these. And it involves shooting ghostly particles called neutrinos literally through the Earth over a distance of 800 miles (nearly 1,300 kilometers) from one physics lab to another.

An international group of physicists has announced that they have seen the first signals in a cube-shaped detector called ProtoDUNE. This is a very big stepping stone in the DUNE experiment, which will be America's flagship particle physics research program for the next two decades. ProtoDUNE, which is the size of a three-story house, is a prototype of the much larger detectors that will be used in the DUNE experiment and today's (Sept. 18) announcement demonstrates that the technology that was selected works. [The 18 Biggest Unsolved Mysteries in Physics]

The DUNE detectors will be located at the Fermi National Accelerator Laboratory (Fermilab), just outside Chicago, and the Sanford Underground Research Facility (SURF), in Lead, South Dakota. When the experiment is up and running, a powerful particle accelerator at Fermilab will make an intense beam of subatomic particles called neutrinos, shoot them literally through the Earth, to be detected at SURF.

Neutrinos are the ghosts of the subatomic world, able to pass through the entire planet with almost no interactions. Neutrinos have surprised scientists many times in the past. From their unprecedented ability to pass through matter without interacting, to the fact that they treat matter and antimatter very differently, to their ability to morph from one version into another, neutrinos continue to fascinate the world's scientific community. It is those last two properties that the DUNE experiment will investigate.

Antimatter is something that sounds like science fiction, but it's most assuredly real. Antimatter is the opposite of matter; bring matter and antimatter together and they will annihilate into pure energy. Antimatter was proposed in 1928 and first observed in 1931. In the intervening decades, scientists (including me) have studied it in excruciating detail. Mostly it's understood, with one very vexing remaining mystery. When we convert energy into antimatter, we make an identical amount of matter. This is well-established science. That's not the problem.

The problem is that if we combine that observation with the idea of the Big Bang, something doesn't hang together. After all, shortly after the Big Bang, the universe was full of energy, which should have turned into matter and antimatter equally. Yet our universe is made entirely of matter. So where did that antimatter go? This question is unanswered; but perhaps a careful study of matter and antimatter neutrinos might reveal a difference. [Big Bang to Civilization 10 Amazing Origin Events]

There is another property of neutrinos that makes them interesting in the conundrum of missing antimatter…they can morph from one identity to another. Scientist have found three distinct types of neutrinos. One type is associated with electrons and is called electron neutrinos. The two others are associated with two other subatomic particles called the muon and the tau, which are heavy cousins of the electron.

It's like you had a room full of 100 dogs and, when you looked later, there were 80 dogs, 17 cats and three parrots. If you looked even later, the mix would be different still.

The morphing, what scientists call oscillation, of neutrinos is also well established physics. Researchers have suspected it since the 1960s; they were pretty certain it was real in 1998, and they clinched the argument in 2001. Neutrino oscillation occurs and its discovery was awarded the 2015 Nobel Prize in Physics.

The DUNE experiment has several research goals, but perhaps the most pressing is to first measure the oscillation of neutrinos and then the oscillation of antineutrinos. If they are different, it may be that understanding that process in more detail will help us understand why the universe is made solely of matter. In short, it might explain why we exist at all.

The DUNE experiment will consist of two detector complexes, a smaller one at Fermilab, and four larger ones located at SURF. A beam of neutrinos will leave Fermilab and head toward the distant detectors. The proportions of different types of neutrinos will be measured at the detectors both at Fermilab and at SURF. The differences caused by neutrino oscillation will be measured, and then the process will be repeated for antineutrinos.

The technology that will be used in the DUNE experiments involves large vats of liquid argon, in which the neutrinos will interact and be detected. Each of the larger detectors located at SURF will be as tall and as wide as a four-story building and longer than a football field. Each one will contain 17,000 tons of liquid argon.

The ProtoDUNE detector is a much smaller prototype, consisting of only 800 tons of liquid argon. The volume is big enough to encompass a small house. The collaboration of DUNE scientists is worldwide, drawing researchers from around the globe. While Fermilab is the host laboratory, other international laboratories are also involved. One such facility is CERN, the European particle physics laboratory, located just outside Geneva, Switzerland. The ProtoDUNE detector is located at CERN, further cementing a long relationship between the laboratories — for instance, Fermilab has long been involved in research using data recorded by the CERN Large Hadron Collider. DUNE is CERN's first investment in an experiment being conducted at a laboratory in the United States.

Today's announcement is a big one, proving that the liquid argon technology that will form the heart of the DUNE experiment was a good choice. A second ProtoDUNE detector will come online in a few months. The second version uses slightly different technology to observe the tracks of particles caused by rare neutrino interactions. The results of the testing of these two detectors will guide scientists to a decision on the final design of the detector components. DUNE will be built over the next decade and the first detector modules are scheduled to be operational in 2026.