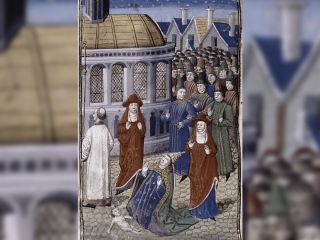 This miniature artwork shows Pope Joan, who has just given birth to an infant during a Church procession.
(Image: © The New York Public Library)

Medieval legends claim that Pope Joan was the first and only female pope. And now, an analysis of ancient silver coins suggests that the ordained woman may have actually lived.

According to legends from the Middle Ages, a pope named John, or Johannes Anglicus, who reigned during the middle of the ninth century, was actually a woman, Pope Joan. For instance, a story from the 13th century written by a Dominican monk from Poland named Martin claimed that Pope Joan became pregnant and gave birth during a church procession. [History's 10 Most Intriguing Popes]

However, there is much debate over whether a pope named Johannes Anglicus existed, much less whether this pope was a man or woman. The doubt stems in part from the great deal of confusion over the identities of popes during the middle of the ninth century. For example, in the oldest surviving copy of the "Liber Pontificalis," the official book of biographies of popes during the early Middle Ages, "Pope Benedict III is missing entirely,"study author Michael Habicht, an archaeologist at Flinders University in Adelaide, Australia, told Live Science.

Discovering whether Pope Joan existed may not only solve a religious and historical mystery, but also factor in to modern arguments over the role of women in the church. "The debate on female ordination in the church is still ongoing," Habicht said.

Now, Habicht has suggested that symbols on medieval coins show that Pope Johannes Anglicus may have existed, and so, Pope Joan may have been real as well. "The coins really turned the tables in favor of a covered-up but true story," Habicht said.

The research began when Habicht was conducting unrelated work investigating burials of popes in Rome. "In the beginning, I also believed that the story of Joan was mere fiction, but when I did more-extensive research, more and more, the possibility emerged that there was more behind the story," he said.

Habicht analyzed silver coins known as deniers that were used in Western Europe during the Middle Ages. Their name comes from the ancient Roman silver coin known as the denarius. "They are quite small, perhaps the size of a U.S. dime or quarter," he said.

The deniers Habicht examined were minted with the name of the emperor of the Franks on one side and the pope's monogram — a symbol made using a person's initials — on the other side. Habicht focused on coins previously attributed to Pope John VIII, who reigned from 872 to 882.

The archaeologist said that while some deniers possessed a monogram belonging to Pope John VIII, earlier ones had a significantly different monogram. "The monogram that can be attributed to the later John VIII has distinct differences in the placing of letters and the overall design," Habicht said.

These other coins may have belonged to a different Pope John — Johannes Anglicus, the potential Pope Joan, Habicht said. He noted several historical sources that suggested a Pope John reigned from 856 to 858. For example, the chronicler Conrad Botho reported that a Pope Johannes crowned Louis II of Italy as Holy Roman Emperor in 856, Habicht said.

"The monogram was the forerunner of today's signature," Habicht said. "Thus, we probably might even have a kind of signature of Pope Joan."

Previous scientific literature suggested that these coins are not fakes, Habicht said. In addition, "there is almost no collector market for such medieval coins," Habicht said. As such, "forgers are not really interested in faking them. Some years ago, some papal coins of the ninth century A.D. were offered at an auction sale in New York. Most of the coins were unsold and returned to the owner."

All in all, "some will embrace my study and find other evidence for female priests in the early centuries of Christianity," Habicht said. "Others will entirely reject the idea and make a big media noise against such claims. A big mud-pie battle may follow. It might go on forever."

Habicht detailed his findings in a book, "Pope Joan," via epubli Aug. 28.