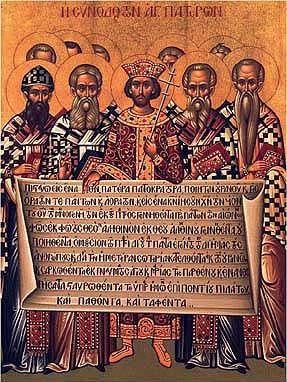 The Council of Nicea was the first worldwide gathering of the Church.

When Constantine became the first Christian leader of the Roman Empire in the 4th century, his vast territory was populated by a hodgepodge of beliefs and religions.

Within his own young religion, there was also dissent, with one major question threatening to cleave the popular cult — as it was at the time — into warring factions: Was Jesus divine, and how?

It's hard to imagine riots in the streets, pamphlet wars and vicious rhetoric spawned by such a question, but that was the nature of things in A.D. 325, when Constantine was forced to take action to quell the controversy.

That summer, 318 bishops from across the empire were invited to the Turkish town of Nicea, where Constantine had a vacation house, in an attempt to find common ground on what historians now refer to as the Arian Controversy. It was the first ever worldwide gathering of the Church.

The Christianity we know today is a result of what those men agreed upon over that sticky month, including the timing of the religion's most important holiday, Easter, which celebrates Jesus rising from the dead.

Christianity was young and still working out the kinks when Constantine took power over the Roman Empire in A.D. 306. Christian doctrine at the time was muddled and inconsistent, especially when it came to the central question of Jesus' relationship to God.

Jesus was as eternally divine as the Father, said one camp led by the Archbishop Alexander of Alexandria. Another group, named the Arians after their leader Arius the preacher, saw Jesus as a remarkable leader, but inferior to the Father and lacking in absolute divinity.

Supporters on both sides scrawled graffiti on town walls in defiance while bishops from across the empire entered into a war of words as the controversy simmered to a head in 324.

Fearing unrest in his otherwise peaceful territory, Constantine summoned the bishops to his lake house in Nicea on June 19, 325.

In a savvy move that would put today's shrewd politicians to shame, the compromise proffered by Constantine was vague, but blandly pleasing: Jesus and God were of the same "substance," he suggested, without delving too much into the nature of that relationship. A majority of the bishops agreed on the compromise and voted to pass the language into doctrine.

Their statement of compromise, which would come to be known as "The Nicene Creed," formed the basis for Christian ideology. The bishops also used the Council of Nicea to set in stone some church rules that needed clarification, and those canons were the reference point after which all future laws were modeled.

As a final order of business, the bishops decided upon a date for the holiest of Christian celebrations, Easter, which was being observed at different times around the empire. Previously linked with the timing of Passover, the council settled on a moveable day that would never coincide again with the Jewish holiday — the first Sunday after the first full moon on or after the vernal equinox.

While the Council of Nicea had important consequences, its significance has been exaggerated into legend by a few conspiracy theorists, documentaries and books such as Dan Brown's "The Da Vinci Code," historians say.

Contrary to popular belief, the council had nothing to do with selecting which verses and gospels would be included in the Bible, nor whether Christianity agreed or disagreed with the concept of reincarnation. Bishops did not burn books they deemed heretical there either, historians say.