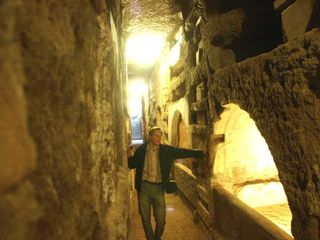 Leonard Rutgers stands in the Jewish Villa Torlonia catacomb, which he and his colleagues have recently shown was begun a century before other Christian catacombs in Rome.
(Image: © Utrecht University.)

The Roman catacombs are intricate labyrinths of burial chambers that were built roughly between the third and fifth century AD.  They are considered among the most important relics of early Christianity.

But a recent study of a Jewish catacomb in the same vicinity finds that it was started a century before the oldest known Christian versions.

In addition to the 60 Christian catacombs that have survived in Rome, there are two Jewish catacombs, which are distinguishable by the decorative artwork and inscriptions that were used.

"Jews were buried only with Jews and Christians only with Christians," says Leonard Rutgers of Utrecht University in the Netherlands.

But the fact that the catacombs are all constructed with similar layouts and architecture suggests a common origin.  Rutgers and his colleagues have used radiocarbon dating to show that the Jewish Villa Torlonia catacomb was begun in the second century AD -- and perhaps even earlier -- making it the oldest known of the Roman catacombs.

According to Rutgers, the Roman pagans largely practiced cremation up until the second century, when — for some unknown reason — they started burying their dead.  However, this was usually in family tombs, not catacombs.

The Roman Jewish community, which dates back to the first century BCE, would have likely chosen to bury rather than cremate their dead.  The same would have been true for the early Christians.  Perhaps because of a scarcity of land, these groups began excavating the soft volcanic rock, called tufa, outside the city walls.

"Tufa is fairly easy to work with, and it hardens once it's been exposed to the air," Rutgers told LiveScience in a telephone interview.

Some of the catacombs extend for hundreds of yards and have multiple levels.  Bodies were placed in niches, or "loculi," that were carved out of the walls. Rows of these loculi extend from floor to ceiling.  Although an exact number is not known, thousands upon thousands of tombs line the hundreds of miles that make up Rome's underground cemeteries.

Rutgers' team carefully extracted pieces of charcoal from the layer of lime used to seal tombs in Villa Torlonia.  The charcoal, which was burned to convert limestone into lime, is essentially the only organic samples that remain in the catacombs.

"It's very humid down there, so there are no bones left.  They have all disintegrated," Rutgers said.   "The charcoal survived because it was hardened in fire."

The dating of charcoal from several tombs shows a range of ages — with the earliest near the catacomb entrance, becoming progressively later as one goes deeper down the long, dark corridors.

The results are described in the July 21 issue of the journal Nature.   The authors stress that a similar sort of radiocarbon dating is necessary in Christian catacombs to confirm their uncertain ages.

Regardless of whether another catacomb is found to be older, Rutgers said that the larger point is that Jews and Christians coexisted peacefully for centuries and clearly influenced each other's cultures.