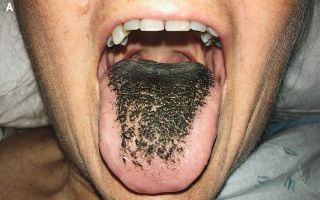 After taking antibiotics for an infection, this woman developed a black and "hairy" tongue.
(Image: © The New England Journal of Medicine ©2018)

A 55-year-old woman's tongue took on a black, "hairy" appearance after the woman was treated with antibiotics for an infection following a car accident.

The accident crushed both of her legs and led her to develop a polymicrobial wound infection — an infection caused by more than one microbe, according to a case report published yesterday (Sept. 6) in The New England Journal of Medicine.

To treat the infection, doctors started her on two separate antibiotics: meropenem and minocycline. After a week, the woman reported feeling nauseous and having a bad taste in her mouth, according to the report. She also had another, more striking symptom: Her tongue had turned black and hairy. [7 Weirdest Medical Conditions]

This condition, perhaps unsurprisingly called "black hairy tongue," isn't harmful, the report said, and is caused by the enlargement and growth of little bumps on the tongue's surface. These bumps, called filiform papillae, unlike other kinds of papillae on the tongue, do not contain taste buds, according to the Encyclopedia of Neuroscience. Instead, they help to grip food, according to a paper published in 2016 in the journal Developmental Dynamics.

Black hairy tongue could be caused by a number of factors including certain medications, tobacco use, irritating mouthwashes or poor oral hygiene. In the woman's case, the doctors suspect that the antibiotic minocycline was to blame, according to the report.

Indeed, when the doctors switched the minocycline to another antibiotic and advised her to practice good oral hygiene, her tongue returned to its normal appearance within a month.